Dark & White Trail Running Events are all based in and around the Peak District National Park, each event having a choice of a long and short course. The Castleton run was the first of this years ‘Autumn series’. The long course (run by 206 runners including the 3 Striders) was 14km and the short course (run by 37 runners) was 5.6km. All who took part were lucky enough to enjoy some stunning views of the Dark Peak and clear skies.

The start line was certainly novel – it involved a hike part way up Cave Dale (‘a dry, high sided limestone valley overlooked by the impressive Peveril Castle’), part of the Limestone Way. Standing at the start line out of breath already was slightly concerning but I was hoping maybe that was the steep bit done? The first section was hard going, continuing up the rocky valley dodging the sheep poo and loose rocks. Luckily the start is well staggered in 10 minute intervals so although it was quite narrow, it wasn’t crowded. After the initial climb the landscape opened up and we continued through undulating fields. We then started climbing again up to Mam Nick and here the spectacular views of the Dark Peak moorlands were really apparent. After a brief drop off the north side of the Great Ridge, it was back to climbing again to reach Hollins Cross – the views from this point were incredible and well worth the effort in getting there, although it was more of a trudge than a run by this point! Thankfully, the route then got a lot easier, following a ridge path before the long descent off Lose Hill. We eventually arrived in Hope village for a brief time then back onto field paths for a steady run to the finish just outside Castleton village.

It was then a 5 minute walk back to Castleton village hall for tea and cakes.

This was the 3rd ‘Dark and White Events’ trail run I’ve done and as a beginner to trail running, I can highly recommend them. There is a real mix of people – some running competitively and some just out for a more relaxed, sociable run in beautiful scenery. The events are reasonably priced (£15 to enter the long route or £39 to enter the series of 3 long routes) and very well organised with plenty of cakes at the end! One thing I really like is that as someone who is severely challenged when it comes to spatial awareness, the routes are extremely well signposted with easy to spot blue and yellow arrows at regular intervals. You are also given a printed map at the start. The route is timed with 3 points you have to ‘dib’ at (including the start and finish). There is always a feed station halfway and on this particular route, it was tempting to just stop for a while and enjoy the stunning views having just come up a very steep climb!

I found this particular run to be incredibly tough in parts with some steep gradients (320m ascent) and lots of technical bits where you were running on loose rocks and trying not to break your ankles! The consensus from the Striders trio at the end was that this route was definitely quite a bit harder than previous events completed in the Spring series and seemed more like a fell race than trail. In the latter section especially, there were so many gates and stiles (and a railway line to cross), which made it difficult to get into a rhythm. Overall however, it was a brilliant race which reminded me of the amazing places we have to run in, right on Sheffield’s doorstep. The other 2 runs of the Autumn series are Biggin on 23rd September and Buxton on 4th November.

The long race winners were: 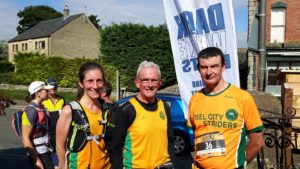