Sunday 6th May 2018 saw the 24th running of the Prague Marathon.

I’d booked this months before as an excuse for a weekend away in a great city, but also with my eye on a Good For Age time for London next year (before they went and made that more difficult). The marathon website boasts that “the event record of 2:05:39 is fastest marathon held in May in history”, so I was hopeful the course had that PB potential and I’d done just over 3.05 in Edinburgh last year.

However, on the day I didn’t know what to expect after missing the last four weeks of my training due to injury. My training up to that point had been good but I knew my GFA ambitions were likely out of sight and was just out there to enjoy it as much as possible and see what happened!

The race started and finished in the Old Town Square. I found organisation at the start excellent, although didn’t need to use the technical area which included the bag drop which was a few minutes walk away. It was easy to get to the allocated start corridor and the race started bang-on 9am.

The weather forecast was sun, sun and more sun – not quite London temperatures but felt very warm indeed.

The course itself is pretty flat, following the path of the river for much of it, and over many bridges, including the famous Charles Bridge a couple of times. A few km of cobbled roads didn’t really affect the pace, although concentration to avoid tram tracks was needed in places. As with many marathons, a few miles were spent on long roads outside of the city so a bit less scenic, but the bridges and city centre parts more than made up for it.

For my race personally… a marathon in the heat after not running for four weeks is pretty tough as it turns out! The first half was reasonable but the cramp set in at 25km and my pace faded badly from there. The last few km was a cycle of run-walk-stretch-repeat and in the end, I was delighted to see the finish line still under 3:30. My only consolation was even had my training not been rudely interrupted, the hot conditions may well have seen me miss my target anyway (at least that’s what I tell myself!). Roll on the next one!

I was the only Strider in the results although kudos to potential future member Abbie Pearse who gave me my only shout of ‘Striders!’ as we passed on the course! 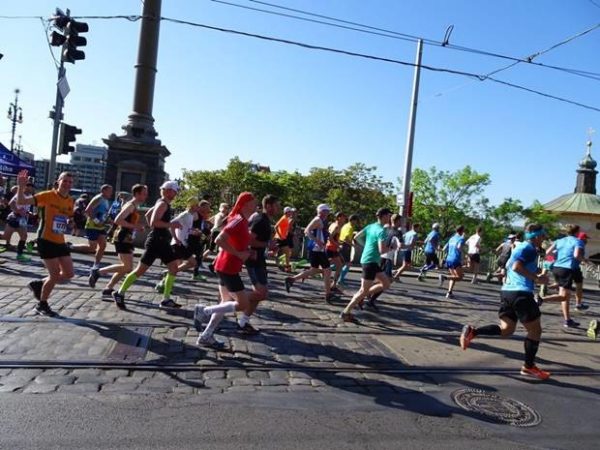