This is a local race that has reached its 19th edition this year. It takes place in Col San Martino (Treviso), in the heart of the prosecco making area, it’s a very green area filled with vineyards and small little lovely villages/towns.

There are two route options: 6km and 13km (even though they can be advertised as 5 and 12km for some weird reason). They are both pretty undulating/hilly. The 13km had between 500 and 600m elevation depending on the gps you use. It was a beautiful route among the vineyards and through the canteens where prosecco is made. It was a fairly hot day with pretty clear sky so the organised played it safe by having water stations almost every 2km.

I stayed in the area with my parents, my sister and her daughter and met at the start with several friends from Venice. All together it was 14 of us, including my almost 2 year old niece Maja and my friends’ dog Ugo. Most of us ran the 13km route, while my parents, together with Maja, Ugo and another friend walked the 6km one. 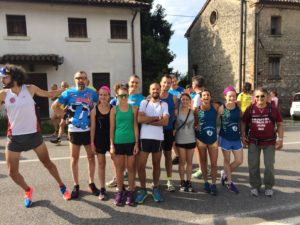 What Val didn’t mention is that she is due in August. Running for two. Note the yellow shorts although not so sure about the tripe. quando scatta il fischio di partenza mentre sei ancora in posa foto di gruppo

So this is how it works: you can race it and miss out on the prosecco or you can take it easy and steady and once you get to the water stations enjoy some locally produced prosecco. Well there isn’t prosecco at each station but I would say 5 out of 7 stations had some, together with watermelon and some other treats. Towards the end of the race, around km 9, there is the widely advertised and awaited “Enosoccorso” (wine aid) which is a bigger feed station with prosecco, spritz aperol, salami, cheese, crackers and this year they made tripe (they change dish selection every year).

Considering the race starts at 9am, it can be quite challenging to eat and drink as much but you got to make the most out of the 2 Euros registration fee after all, don’t you?

Now don’t be so fussy and ask about results coz this is one of those lovely Italian races where you don’t get a bib number, instead you get a race wristband and you don’t get in the rankings if you don’t bring a medical certificate and anyway the results don’t get published anywhere. So chill and have a glass of prosecco, cin cin!

I am most certain I was the only Strider there and finished in 1h 36’. I’ve got no clue about winning times though =P

This is a short video of the race if you’d like to see how the area looks like.

I would truly recommend this race if you happen to be around that area at that time of the year. It’s a low key race that is good fun and really well organised and you get well fed too!