The Pudsey 10k is a well established event organised by Pudsey Pacers. It’s described as a multi terrain undulating 10k around the streets and valley of Pudsey. The route starts with an undulating lap of the roads around the town before dropping sharply into the valley of Tyersal Beck, followed by an even steeper climb away from the Beck towards Black Carr Woods and the half way point. Then it’s back into the steep sided valley of Tyersal Beck again, with another very steep ascent at about 7km. Finally the route returns to road for the last couple of km (more climbing) to finish in Pudsey Park.

I was surprised how technical the route was; the constant climbing and dropping made it hard to establish any kind of rhythm and two of the climbs were steep enough to reduce most of the participants to walking. It also represented excellent value at £12; hardly surprising it sold out before race day. I’d unreservedly recommend this race to fellow Striders, just don’t expect a PB! 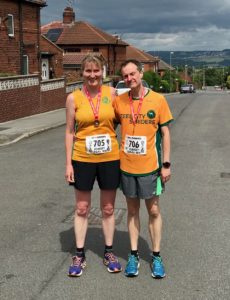