Craving a bit of December sun again after our exploits in Pisa last Christmas, and with Martyn wanting to brush up on the Italian he’d been practicing in the shower, we decided to treat ourselves to a little end of year holiday… Of course, anyone that knows us would fully expect it to involve running 26.2 miles.

Established in 2014, The Marathon of Cathedrals takes runners on a beautiful course through the centre of five towns overlooking the sea – showcasing five shining examples of Romanesque cathedrals in Puglia. Starting in Barletta, the route continues along the Adriatic coast through Trani, Bisceglie and Molfetta, finishing north of Bari in Giovinazzo.

Getting there wasn’t entirely straightforward due to our last minute decision and tight budget. The cost of flights had tripled in the few days we were arranging our entries via email which meant it wasn’t viable for us to go via a direct flight anymore. Martyn proceeded to concoct a ‘Planes, Trains and Automobiles’ type adventure with an itinerary as follows… Get up at 4am, walk to the train station in the snow, get a train to Manchester Airport, board a flight to Rome, get a train from the airport to the centre of Rome, walk to the bus station (we pencilled in a sandwich and a fight at this point), endure a 6.5 hour bus journey to central Bari, and finally, check into a hotel. This totalled over 17 hours of travel in one day, which isn’t ideal just before a marathon, but we executed it with precision and surprisingly no ding-dongs took place.

The morning after we were all geared up for the marathon village. We went to catch the advertised shuttle bus from Molfetta railway station to the expo. When we arrived at the tiny and rather empty station there was no signage nor any official-looking people that we had expected to see. Eventually we spotted an unmarked transit van with blacked out windows parked up nearby – which was empty bar the driver. We had no idea if this was the van we were supposed to get in and the driver’s silhouette looked a bit spooky. It took us half an hour to pluck up the courage to get into this van and speak to him, but it turned out all was fine so we could laugh about it after.

The marathon village comprised of a desk in the foyer of a fashion outlet off a motorway. We received our numbers and Martyn proceeded to ask for a medium t-shirt. This was met with raucous laughter and they handed him a large t-shirt and a bag of pasta.

On the morning of the race, the shuttle bus took us to the start line 2.5 hours before the start so it was a challenge to keep warm. We met a couple of nice people to chat to and pass the time after a couple of espressos – a chap from Essex called Justin who was on the quest for sub 3, and an American lady called Laura who is now five continents into her seven continent challenge.

The weather was sunny and very hot by a few miles into the race. Still, I was running strong, chatting away to other runners at this point and even enjoying the sights. No bleeding eyes just yet. After the halfway mark we were joined by the half marathoners and I found I had been accompanied by a cyclist called Luigi. The marathoners were more drawn out by this point and I presumed we must divert away from the half route at some point and he was making sure I went the right way. I didn’t know why people were cheering quite so much for me but after hearing ‘prima donna’ a few times it eventually twigged I was first lady!

At mile 22 things took a downward spiral. There hadn’t been any bottled sports drinks at the feed stations and I believe I’d probably flushed out too many electrolytes with water. It was a struggle to stay upright – my legs were collapsing beneath me and the world went slow motion. I pressed on as best I could with the encouragement and support of Luigi and finished in 3.14.39 with blue lips. Martyn (also blue-lipped at the finish) ran his strongest marathon of the year, but blames not achieving a faster time on being cut up by a woman earlier in the race and not managing to get over it.

I felt so unwell as I crossed the line that it was a lot to take in. Two interviews in Italian and I received a unique trophy that was handmade by a local Italian artist. The second and third lady were American and Russian respectively which also added to the difficulty and comedy of the Italian interviews. I was able to absorb it all with the post-race lasagne. It was a great event and I would definitely recommend.

512 runners took part in the race, with representatives from 26 different nationalities including two Striders. The race was won by Leonardi Massimo of Unione Sportive Monti Pallid in 2.29.41 and the first lady home was myself in 3.14.39 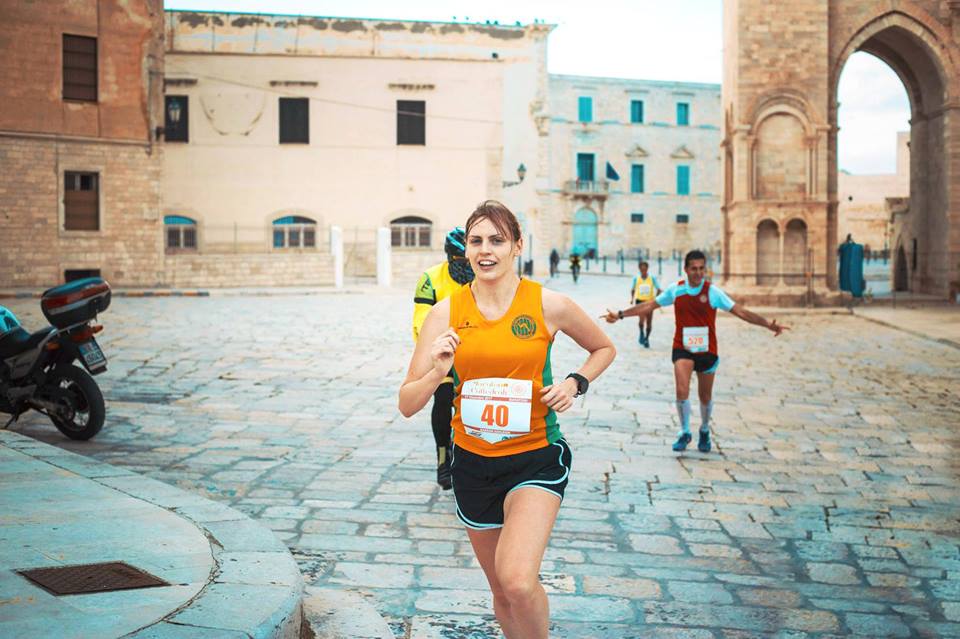