This was the 35th edition of Race the Train and the day included four races and a kids’ race. There was a 3.5-mile race, a 5.5-mile race, a 10k and the 14-mile main event (13.86 miles by my Garmin). This race marked two firsts for me. My first race in a Striders vest and my first, primarily off road/ fell race.

Being a multi distance event meant that my wife got to take part in the 10k in the morning whilst myself and the kids were on cheer-squad/high-fiving duties and in the afternoon they were on the train trying to spot me in the distance amongst hundreds of other runners.

The main race starts on the road bridge next to the Tallylyn train station, with the aim of beating the first steam train in approximately 1:48! There was also a second train that left 20 minutes after the first, with both trains carrying supporters. Being a realist, I booked my family’s seats on the second train!

Being new to the club I was pleased to bump in to fellow Strider Heather Wallis at the start, who informed me that Sam Needham was also up near the start line.

The whistle of the steam train signified that the race was on! The race starts in the town and after about a mile or so on road, you turn on to a farm track, passing through the first farm and on to the farm fields. The first 7 miles of the race are relatively flat, so this was the chance to get up some speed before the hills met you at about mile seven. The weather up to this point had been gloomy and miserable but as soon as the race started, so did the rain!

The rain had stopped by about mile seven (or I just didn’t notice) when we started our ascent, which coincided with the first sighting of the train, further up the hill-side, parallel to where I was. We had heard the train’s whistle a number of times but never saw it! So myself and a fellow runner got pretty giddy when we saw it! Jumping up and down and waving like idiots off into the distance as we saw arms waving back, not knowing whether it was the first or second train or whether my family was on it!

I gradually ran up the hillside, passing the odd runner on my way until we entered under a stone arch which took you up a step incline on to what has been described on the race website as a sheep track. This was a single foot track, clinging on to the hill-side with no chance of overtaking anyone or looking at the views – as one wrong step could have you rolling down the hill-side.

The race then took you through woodland and past the beautiful Dolgoch falls and up a number of steep steps. I had been wondering along the route when the infamous bog was going to appear and just after the waterfall it did! A wide expanse of deep mud awaited us all, with runners taking various directions to try and avoid the worst of it – in some cases failing miserably as they were sucked in to the gloop! Luckily I managed to skirt around the edges and continue along the track.

Having primarily run road races I wasn’t used to the next challenge, which was running across a hill with a pretty steep camber. It was a quick decision to either run along the middle and then ease left up to the top of the hill, up the hill and along or along the bottom and then gradually climb up! I decided quickly to head along the bottom and 2/3rds along gradually climb up the hill to the top. Not long after this was the last hill which I managed to just about run up whilst managing to pass quite a few runners who had decided to walk by that point.

All of a sudden at around mile 12 the train suddenly appeared out of nowhere right alongside me. Thus ensued lots of frantic arm waving from myself (see photo) and lots of cheers and screams from the train’s passengers, including my wife and two children cheering me on from the train window!

The last 2-3 miles are the same back as they are out, passing through a couple of farms and back into the Tywyn.

I had such a great time running this race. The support from the marshals and the rescue teams along the way is brilliant and I will hopefully be back next year for another go! Although I’m under no illusion that I will be beating the train!

586 runners finished the course, of whom 103 beat the train. Chris Roxburgh from Avon Valley Runners won the race in 1:28:47 and first lady was Amanda Wright-Smith from Birchfield Harriers in 1:42:35.

Well done to Sam for beating the train and to Heather for smashing her previous time by 17 minutes!

Full results can be found at: http://www.racethetrain.com/results-for-2018/ 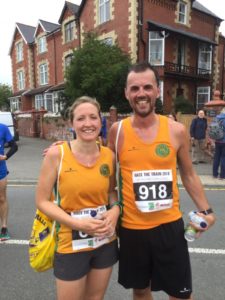 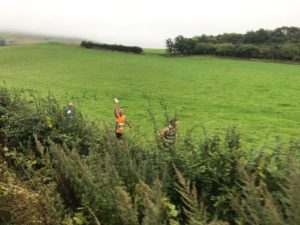