by our correspondent from the continent

We wanted to visit some friends who now live in Barcelona and of course I picked a weekend with a half marathon involved.

We flew on Friday afternoon and had the time to catch up with our friends over dinner in a very cosy local restaurant in Barceloneta area. We had glorious sunshine and ok temperatures on Saturday and spent the day rock climbing in Cubells, with stunning views of the countryside.

The forecast for Sunday were not great, it was meant to rain and temperatures were meant to be way below what you’d expect in Spain at the beginning of February which for a regular runner would probably be good news, but for me, always desperately seeking a break from the long cold wet winter, was a real let down. On the bright side, this way I was able to finally try out my striders long sleeves top, obviously with my beloved thermal top underneath.

The race was first held in 1987 and I was told at the start line that this was the first year the sun didn’t shine – how lucky!

In addition to the half marathon there was the 10k as well as the option to run the half as a team in relay style. The registration was 28 euros at the time I signed up which I thought was well worth the technical t-shirt, a waterproof jacket (not necessarily for running as it’s navy blue with no high vis), two bags of noodle soups and a limestone remover spray which I sadly had to leave with my friends as it was exceeding my hand luggage liquid allowance – what a shame!

I decided to leave my man and my friends home to get a lay in and I took the train out to Granollers from Barcelona (ticket was included in the race pack too). I had about 25 minutes walk to the train station (I could have taken the underground but thought it would be a good warm up) and then half an hour train journey.

The half marathon started at 10:30am and I planned to arrive an hour before then but the trains ran more frequently than expected so I ended up there a bit earlier. The atmosphere was already buzzing though as the 10km was starting at 9:30am (probably a good thing I arrived a bit earlier). It was raining lightly when I got there and I went straight to the pavilion to start queuing for the toilets. I was very impressed by their organisation and willingness to make everything go smoothly: as we were queuing there were volunteers coming to tell us that there were other sets of toilets and directing us there, all of them were also proper toilets (not portaloos) all equipped with plenty of toilets paper, soap etc. the queueing time never lasted longer than 2 minutes which I think it’s pretty good on a field of 4500 finishers. The other good thing was that only runners were allowed in the pavilion (both pre and post race) so that obviously made everything even more efficient and the smell of hospital given from the extensive use of heat rubs, almost unbearable. 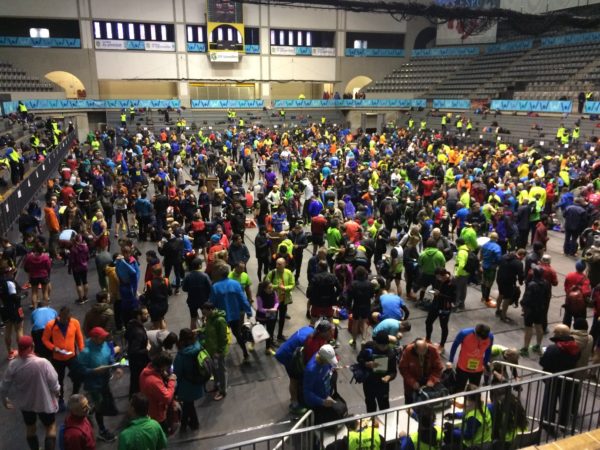 Athletes only – keeps the tubes open

I waited until 10:15 to make my way to the start as I really didn’t want to get wet (my shoes overall) before starting the race – I was prepared for the worst, torrential rain Spain had ever seen. I had one of those sheets they give you at the end of races to keep warm and I also brought a rain shield.

Turned out the rain was so fine it didn’t really matter and to top it all it stopped raining just before we set off. I was delighted!

Another thing to note is that I found the Spanish very “tidy” and respectful. I entered my starting block and all the runner were warming up inside the block in a very organised way, running around in circles and not causing any problems to one another – a thing never seen in Italy J

I knew the first half of the race was slightly uphill so I took it easy and steady focusing on not firing up the ongoing issue I’ve got on my right leg (it’s yet to be confirmed after 7 months what is going on there, some says it might be endofibrosis of my iliac artery but tests need to be carry out to check on this option – so no more speed/hill/interval sessions for me until it’s sorted). I really enjoyed the atmosphere of the race, the Spanish supporters were super (I remember this from Valencia Marathon). There were some parts that hadn’t got any support but in general it was really good, including the unmissable drums band by an underpass – that really makes my race, I find it so powerful!

The incline was not impossible to manage, it was slight with only a few short steeper stretches, a walk in the park for you Sheffield lot! At the turnaround point I still felt quite fresh and knowing that the rest of the race was mainly downhill was mentally very satisfying. I still had lots in my tank and my leg was behaving, so I started pushing a bit more and then a bit more and again and again. The imperceptible uphill incline on the way out, was a real boost on the way back in, it felt like flying and once I reached the 15km mark I knew I could push a little bit more. At 3km to the end I didn’t care anymore if the pain would have fired up, I could handle it for that short distance. So I went for it closing in 1h 34’, making my last km the fastest one in 3’ 56” (Peter, do I get a penalty km for that? =P).

The most satisfying thing was to overtake the 1h 35’ pacer 1km to the end! I started the race thinking I would finish somewhere between 1h 40’ and 1h 45” so I was well pleased with my result.

At this race you don’t get a medal, but it’s probably a good thing as I’ve got way too many, after the finish you find hot tea, water, oranges, powerade and some very interesting sesame seeds breadsticks with chocolate chips and really good hot showers.

I would like to thank the Spanish weather that despite all the forecast managed to keep me dry (and happy) and it only started raining properly as I walked out already showered and changed. 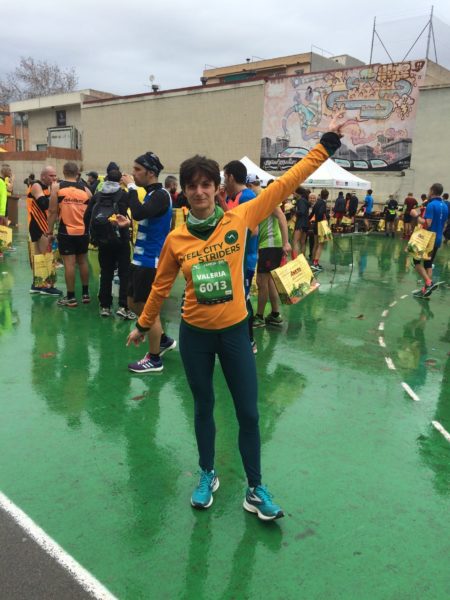