So why Redcar? As was mentioned in ‘The Mighty Redcar’ people used to flock there, as being a lad from Middlesbrough (10 miles away) I was regularly there with family and friends – enjoying the arcades, beach and a lemon top (must be from Pacitto’s otherwise it’s a cheap copy). Also the wife’s family lives in nearby Marske.

The run itself has been on the go since 1982 and it forms part of the Redcar Running Festival, alongside fun run, 5k & the new 10k. The festival is organised by New Marske Harriers. There is ample free parking at the nearby college & school – about 10 minutes’ walk from the start.

Unlike many of the races I’ve entered the running numbers are not issued well in advance, but had to be collected on the day from a new building, Tuned In. For those that might know Redcar, this is situated opposite where Redcar Bowl used to be. Ah the memories – saw a few bands there over the years: Wonderstuff, Voice of the Beehive, Terrorvision and I was sure of the Primitives but it might have been Transvision Vamp. I did have concerns about the number collection and timing to get to the start, but it was very slick and organised.

The route is not the most scenic, some might even call it a mainly boring out and back route. Setting out from the start, which was a few hundred meters along the road from Tuned In and heading towards the Trunk Road, over the railway bridge and passing Locke park (Redcar Parkrun) towards the now largely empty steelworks. The first turning point is at about 3 miles and heading back into Redcar. This is only real non flat section – not a very high climb but long at about 1 mile, and heading past Tuned In before making the way along the seafront. The final turning point is at about 9½ miles just entering Marske, before the final leg along the seafront to the finish, going past Tuned In again.

For a run that has been going for some time, there was very little in the way of crowds, may be the weather, and from what I can gather not a lot of advertising. In fact I only found out about it from overhearing a conversation some time back doing the Redcar parkrun. I have to say that the start didn’t seem particularly well worked. Each race had its own meeting point, but set off straight after each other and I didn’t realised we had started until everyone around me stared running as the PA wasn’t great.

For me it was harder than I expected, considering it was a fairly flat course, as I went out too fast (2nd fast 10km on Strava) and coming back on the final drag from Marske was running into a headwind, whilst not big was energy sapping. I’ve been running well over the last few months, Sheffield 10km new PB by 4 minutes, so I was perhaps a bit overconfident and suffered for it in the latter stages

I had expected to be the only Strider there, however Jacqui Herring was also there and finished in a time of 1:39:36 (Ed’s Note: Jacqui’s time bagged her second place in her category – well done!)

I also bumped into an ex-Strider – didn’t catch her name, but looking at some of the finishing photos (couldn’t see number), it was either Sharon Pearson-Turner or Vicky Denny. 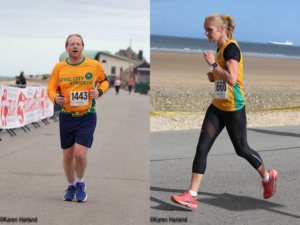 Gary and Jacqui representing in the North East