Well, the 5th Rhodes Half Marathon (along with a full marathon and other races) took place on the sunny island of Rhodes, one of the Dodecanese archipelago in the Aegean.

This run starts in front of the Town Hall and zips along southwards for a bit, past the tourist hotspots of Rhodes town and the magnificent old town walls.  Things then get a bit boring for a while with a potter along the harbour but brighten up when you turn round … and do the same again.

You get back to Mandraki (the military harbour – which isn’t anymore) and take a short diversion along the harbour wall to have a (brief) look at the tower and lighthouse of St. Nicholas and one possible site of the colossus of Rhodes.  You then do a very sharp 180 and carefully avoiding the local feline population (and indiscriminate fishing rods/lines) go back past the start in a kind of wobbly line.

Bizarre though it may seem, the aquarium – on the extreme northern tip of the island – puts in an appearance.  This edifice has an eye catching octopus motif on some iron railings next to it; the effect of said motif is a little distracting as the octopus is wearing a slightly puzzled expression, possibly as a result of hitting the railings at speed.

Things then get a bit routine as you head along the main airport road for what seems like a long time.  Mercifully you do another 180 some way short of the airport and leg it back the way you have just come, in case you missed anything interesting.

The finish is again outside the Town Hall, where, if you are a bit slow like me, you get lots of cheering from the assembled multitude which is heartening, welcome and makes it all worthwhile.  Until you realise that a worthier cheering target is just behind you…

The medal giving was a very enthusiastic event; as there were only a couple of runners around, the heavily medal bedecked young ladies had to jockey for position.  Sadly, I was a little distracted at this point – busily working out what I needed first from air, water, seating or possibly stretcher – so took a while to notice that the person in front was actually trying to medal me.

The physical conditions of the race took their toll; it was both hot and humid.  For the first time in any race, I stopped and drank at each of the 8 water stations – dehydration was a serious risk.  I actually finished in good shape for a change but drank about 2 litres over the hour or so after the race.

287 runners had a go at the Half Marathon with first place going to the Polish runner Mateusz Madziar in an impressive 01:16:16.  First woman home, Pemnoyah Oypania (Greece), was just behind him in 01:18:31.  Great performances.

The full results are here

Table of Strider results (I think I was the only one there): 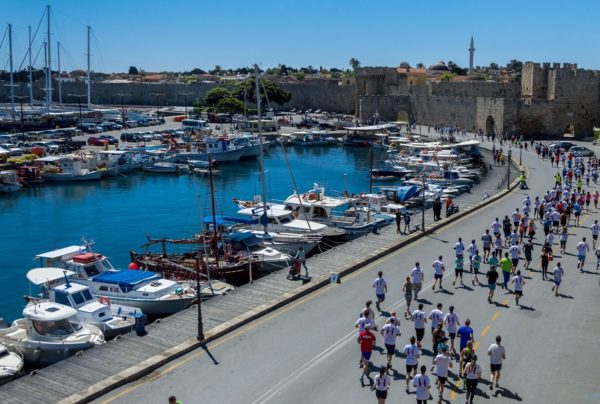