You know you’re a long way from home when you are the only Strider in the race and this was the case for me in the River Ness 10k. I’d entered as my partner Ian was running the Marathon. The events form part of a festival of running which also includes a 5k, fun run and relay. The festival attracts over 8,000 participants and feels like a big event. There is an event village with a marquee in Burgh Park near the centre of Inverness where all the events finish. There is live music, talks, trade stalls and food in the marquee all weekend. Everything about this event is well organised including transport, baggage and marshalling and of course the environment is beautiful. We were last here 10 years ago and the event has grown and become even better.

I’d decided to treat the race as a long run with a faster bit in the middle so as not to miss a half marathon training run. Ian had to set off at daft o’clock for the marathon but the 10.45 start for the 10k meant I could have a nice lie in. I ran from our accommodation to the race start at Inverness Academy which is approximately 3 miles from the city centre where we were staying. Other options would be to drive and get the shuttle bus from the finish back to collect your car. There seemed to be plenty of parking at the start. If you had bags these could be put in a baggage van at the start and picked up at the finish. So, plenty of options.

I got to the start in good time and started some drills and hill reps as there is a slight incline at the start and I wanted to be well prepared for it. All was going well until I suddenly had a severe nose bleed, not a good look on the old white tee shirt I was wearing over my Striders vest and planned to dump at the start. I called into the first aid point who found it very amusing that I was in such a state before the race even started! Fortunately it stopped before the race started.

Unbelievably there was no queue for the portaloos up to 10 minutes before the start. There was no crush as we set off so I was soon over the starting mats along with 2,200 other runners. The route is on tarmac traffic free roads and takes a loop round suburban and rural areas before heading towards Inverness and joins the marathon route along the banks of the River Ness. The race definitely has PB potential, the overall gradient is downhill although it feels strangely hard running on flat road after mostly downhill. There is loads of support on the later stages and the distance markers are a reminder of how far the marathon runners have run when they get to the river bank. From here it’s across the bridge and along the other side of the river to the finish in Burgh Park.

I felt very disappointed to see I hadn’t made it back in under 50 minutes, my finish time was 50.26. Surely I could have got those 26 seconds back somewhere. Anyway I ran back to our accommodation getting my 11 miles in, showered and got back down to Burgh Park for the 10k prize giving. Much to my surprise I picked up second V60 and got a voucher (which I cashed in immediately for a very snazzy pair of Ron Hill shorts I’d had my eye on the day before) and a beautiful pewter Quach which is a traditional Scottish drinking bowl. I went into the marquee, picked up my free soup and oat cake and settled down to enjoy the live band as the rains started to beat down on the Marquee. I had an hour to go before Ian’s expected time for the marathon so settled down to relax and enjoy the whole thing till it was time to meet him. 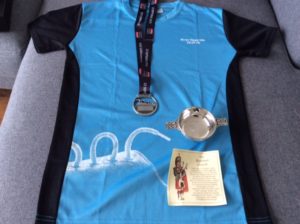