Following the somewhat less than ideal experience at London 3 weeks ago, John Rawlinson and myself headed to the birthplace of the Great Bard hoping for discontented winter like conditions rather than those that could be compared to a summer’s day in London.

The event is organised by the Stratford Rotary club and has been an annual staple for well over 30 years now, supporting a number of local charities.

Pre-race facilities and organisation was good, with ample parking available near the start, and on the day number pick up pain free. Conditions were almost perfect as John and I lined up at the start, giving us both hope that this wasn’t such a bad idea after all.

The first few miles of the course wound through the tight turns of the town itself with a decent level of support from the crowds, before heading down the road out of Stratford towards Evesham. Miles 3-7 saw runners take to country roads interspersed with picturesque villages that reminded me of Askern, just without the hills! Speaking of which, the approach to mile 8 saw runners tackle the only major incline on the course, not too challenging to runners from the 7 hills but it does have quite a tricky descent.

Mile 9 onwards saw the first trip to the Greenway, a TPT like path following a discontinued railway line which offered nice variety to the route before hitting mile 12 where the half split off to finish. Resisting temptation to call it an early day, I followed the rest of the mad marathoners and embarked on loop #2.

This time around the villages didn’t seem quite as picturesque, nor the course as flat and that hill? It certainly seemed tougher the 2nd time around although somehow according to Strava it had lost 5 metres of height between laps, must have been some serious runner footstrike erosion. The temperature seemed to be climbing and matters weren’t helped knowing the 2nd loop is slightly longer with an extra 3 miles tacked on to make up the distance. However, I still felt I was in control and just focussed on counting off the mile markers until I hit the Greenway for the 2nd and final time. This time around would see runners tackling the full length of the trail from miles 20 to 25. This proved to be the most mentally challenging part of the course as by this point there were few runners in sight and the long straight track seemed to stretch forever into the distance. The reflective nature of the surface didn’t help as the sun reflected back off it adding to the discomfort levels. Up until this point I had even entertained an illusion of having something left in the tank to make a decent push over the last 10K but I was soon disabused of this notion as I struggled to maintain pace.  I certainly would have given my kingdom for a horse as I fought to keep my legs turning and not give into the notion of just stopping for a few minutes.

Thankfully after what seemed a small eternity the turn off marker appeared in the far distance and more limping than running I meandered around the home stretch loop into the recreation ground  and to the joyful sight of the finish line.

486 fellow mortals showed what fools they be by completing the full distance with Tom Buckley of Hercules Wimbleon AC first home in 02:41:56 and Claire Rees of Aldershort & Farnham AC first female with a time of 03:09:15.

Striders results for the marathon were:

In the half marathon the overall winner was Simon Birch of Hinckley RC in 01:10:41 and first lady was Nicola Sykes in 01:23:21. Andy Norton was the sole Strider taking part with a strong top 10 finish:

Full results for both races can be found here. 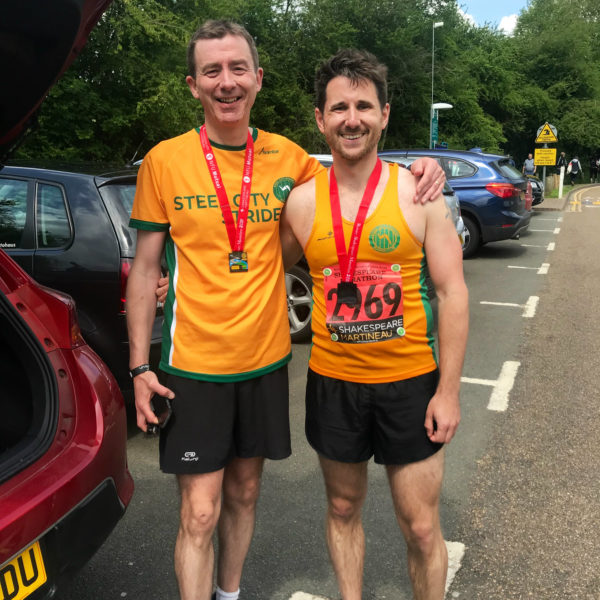