“It’s not in the Steel City, it’s in Rovrum.”  This is no doubt what Arctic Monkeys’ Alex Turner would sing if he ever penned a lyric about Rotherham’s new 10k race, organised by Age UK with the help of Rotherham’s four major running clubs; Maltby RC, Kimberworth Striders, Valley Hill Runners and Rotherham Harriers.  Rotherham has long lacked a major road race and although there are other options out there (Brinsworth in July for example) the inaugural running of this is a welcome addition to the local calendar.

When the organisers decided on an 1115 start time they would probably have figured: “Well, it’s a bank holiday weekend.  It will be cold, cloudy and drizzly, right?”  Wrong.  The long weekend had brought with it cloudless skies with temperatures touching 20 degrees and Clifton Park, where the race stars and finishes, was buzzing with runners, supporters and park-goers.  And so it was that the main topic of conversation on everyone’s lips pre-race was the weather.

After the fun run (a one mile lap of the park perimeter) got underway at 1030, preparations turned to the 10k and as we assembled at the start, outside the park museum and café, it was clear that, sheltered from any breeze and in full sun, it felt very hot indeed.  From the gun it’s a quick start with the first mile almost entirely downhill, passing the park play area, bandstand and cenotaph before leaving the park and on to the first of Rotherham’s significant landmarks; Tesco.  As we made our way into the town centre pedestrianized area I wasn’t the only one, even after less than two miles, who was ducking for any shade offered by buildings or leafy trees.

The route leaves the town centre from here, past The New York Stadium (the home of football) and onto the flat of Centenary Way.  A 180 degree turn then sends runners back towards the town centre via Canklow, past Rotherham Minster and down through All Saints Square where drinks and supporters, somewhat lacking from the previous couple of miles, could be found, and very welcome they were too.  At this point competitors embark on what is, at the 6.5k mark, probably the standout feature of the race: a 2km climb along Doncaster Gate, past Clifton Park again where an impromptu drinks station had also appeared, Rotherham Titans Rugby Club and then up Broom Lane to Herringthorpe Stadium, home of Rotherham Harriers & AC.  This was unquestionably the toughest section of the race, a long slow climb in full sunshine and a few competitors had opted to take a short breather and to walk sections of this.  It’s only 200ft or so but the conditions and the fact that it comes 2/3rds of the way through the race made it a real challenge on the day.

Once the climb is over and runners pass the athletics stadium there’s a short diversion away from the road and into Herringthorpe playing fields, along the paths which bisect it, and then back out and through the houses alongside the park.  One final sharp turn takes you back into the Clifton Park and along the wide tree-lined avenue to the finish, which on Saturday mornings doubles as the final stretch of the parkrun.  I crossed the line in a time of 46:11, about ninety seconds outside of my Percy Pud 10k pb in 2016, but with the sun and the climb I was never going to push for one anyway and overall I was pretty pleased with that.

There was consensus after the race that the start time was a little strange, a perception no doubt influenced by the rising temperatures, but apart from that most people found it well organised and really enjoyable.  And whilst the weather had an adverse effect on times, it certainly brought out the crowds into the finishing stretch and made for a bit of a party atmosphere at the finish line, no doubt added to by Rotherham’s Chantry Brewery whose beer tent seemed to be doing a roaring trade. 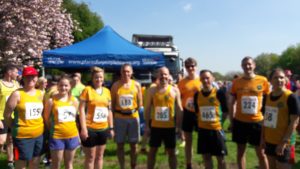