What can I say….it was nice weather for ducks!

The York 10 miler and subsequently the Yorkshire Marathon are within the 5th year of success and entries have always sold out quickly. A circular route which starts off within the grounds of the York University, travels through the town past the York Minster and the impressive medieval city walls leading out through the little villages of York’s beautiful surroundings before heading back to the university towards the finish line.

Often referred to as the “perfect racing distance” the 10 miler was a lovely flat route with all the promises of personal bests and only a hint of a hill insight-something us Sheffielders wouldn’t even notice.

This was my first time doing the York 10 miler and the first time doing any race as an affiliated Strider. Having previously ran the Sheffield Half Marathon for the Sheffield Teaching Hospitals Charity, the York 10 miler was for me, going to be a lovely “fun” run. Taking everything steady and enjoying meeting up with a couple of running friends that I hadn’t seen in a while.

The glorious heat of the Saturday before the run had lulled me into a false sense of security as low and behold Sunday race day arrived and with it so did the colder temperatures and buckets full of rain. Which may I add did not ease at all throughout any part of the day!

As the race began I started off feeling confident and good, as I previously mentioned this was to be a fun run, I love York and even with all the rain I wanted to savour & appreciate all its offerings whist running. The first few miles seemed to fly by, my pace was faster than I normally would have wanted it to be and quite honestly I kept thinking to myself that at any point I was going to have to slow right down…..my fingers and toes were crossed.
The roads were getting wetter and wetter and the running crowd was now tending to clump at certain points of the road to be able to dodge the huge puddles forming. It was like the scene from the Vicar of Dibley, where at any point one of us runners was going to hit the puddles and end up face deep. This was making it harder to pass through and there were several occasions were I become trapped behind runners.

At 6 miles or so my timing was on form, around 52mins and very surprisingly I felt good albeit extremely soggy my Striders vest was stuck to every part of me and I honestly thought that I might be suffering from trench-foot. My hands were red raw and I was getting cold. The crowd support out by the country roads was a little on the thin side to say the least. But neither I or the entertaining group of bagpipe players seemed to be deterred. I dug deep and kept my pace up incorporating the second of two slight hills leading back down towards the finish line where there was a group of Strider supporters waiting in the wings to shout us all back. A great little boost for any runner.

I finished with a very pleasing PB of 1hour 29mins. Despite all the rain, I thoroughly enjoyed myself and the race. York, you were ace and my only slight regret is that I didn’t do the Marathon……maybe next year. 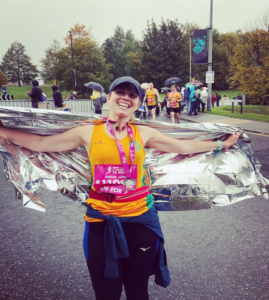