Run as if being chased by Lions

The Run for Wildlife Spring 5k is run by Curly’s Athletes and is held in the Yorkshire Wildlife Park in Doncaster. The route itself gives the runners the chance to run alongside some amazing animals including Lions, Tigers, Rhinos, Baboons and many more. The race itself has won the best 5k National and Yorkshire awards in the 2018 Running Awards. As part of the entry, you get entry into the park and discounted entry fees for friends and family and due to this it attracts a varying field of runners from those completing the course in 16/17 minute runners to 55/60 minute runners.

The event was well organised with ample parking, registration was quick and easy and friends and family being allowed partial entry into the park to spectate at various points during the route. The day itself was fairly cool and perfect conditions for a PB. The course takes you through the park itself explained above and through ‘Lion Country’ twice, at the start and the end of the race. The lions must have thought that they were going to get a free meal as a few of them ran towards the fence as all of the runners came through. 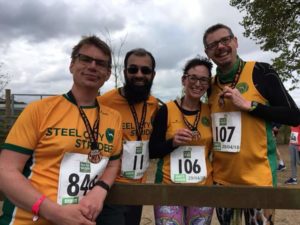