This was the third and final meeting in Sheffield and Dearne’s summer Run Jump Throw series at Woodbourn Road.

It was an open age event meaning youngsters as well as seniors competing and it covered all the usual wide range of track and field events.

I arrived high on the back of two recent PBs in the local masters event but decided only to take on the 200m.  There just wasn’t enough time between 100m and 200m for my old bones to recover in a single evening meeting.

Sometimes in running you just know its not going to be your night. Legs felt heavy and tired during the warm-up, maybe it was the heat?  Plus I could just feel the winds coming down the back straight……. in my mind, i’d already had a bad race before i’d even started.  Nag, nag, nagging away. I think I need to have a word with my Chimp?

Due to low entry numbers there were only 3 x 200m races.  The fastest one looked a tasty affair headed up and won in 21.76 by Lee Thompson who reached the 400m semi final in the world indoors at Birmingham back in March.

Thankfully I was in race two as the third and final race was reserved for the u17s etc.

It was a race of 4 as I was up against two young lads and a young lady.  Well they all look young to me.  I’d been thinking more about race execution since my last race and hoped to get away better at the start.  Bang, off we went and I seemed to do what I set out to do.  Only then to forget all usual technique stuff off the bend and into the straight.  Ah, into the straight….. remember that wind I mentioned? BANG straight in to your face, officially rated at -2.4 metres/second.  It was like running through glue.  The two lads were out in front of me but I just couldn’t get back to the them and had to settle for third place.

So 0.6 ish down on my 25.06 PB from the other weekend……. small margins eh?  How much did the wind make a difference?  Did my new start help?  Maybe i’ll remember to execute my technique later in the race next time?  Was I really tried?  Do I need to sit down with my Chimp for a chat?

Its all over sooooo quickly.  Oh well, much to think about for next time, onwards and upwards.

PS. I was sole Strider there in what looked like a disappointing turn out full stop.  You’ve got to the utmost credit to Tom Grantham of Sheffield and Dearne for continuing to put these events on despite a seeming lack of support.  Attendance was so poor that zero people entered the mile event so there was no race.  Hugely disappointing on such a lovely summers evening.  Like anything, either you use it or we’ll lose it.

So yes, i’m going to continue to bang the drum for track racing and would LOVE to see more Striders dipping their toe and giving it a go.

Full results and national rankings available via Power of 10. 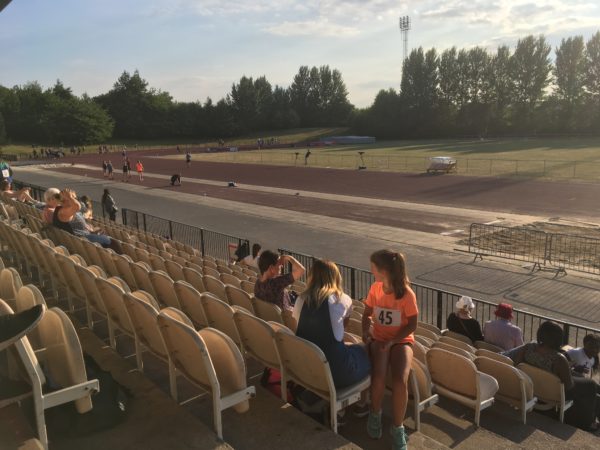