‘RunThrough’ is a self-described ‘running community’ based in London that organises races through the capital (and beyond), mainly in its many beautiful parks. The Greenwich Park 5 and 10k was one such event and, being in London for the weekend visiting mates, I decided to give it a go.

Race prep the day before was very pleasant, beginning with a lovely little Parkrun in Beckton (think Castle without the hills), followed by some ninth tier football league action as Walthamstow entertained Southend Manor in the Essex Senior League. After a convincing 2-0 victory to the home side, we had a couple of post-match pints before hotfooting it to a nearby Italian for more fuelling.

One of the more practical benefits of having a race in a park is that there’s a bit more flexibility over time, and it was nice to be able to take our time in getting to Greenwich for a 10am start. It was beautiful autumn day: blue skies, crisp brown leaves, and jawdropping views of London from the top of the hill.

Ah, the hill. One of the reasons for signing up for a 10k in London was the naïve assumption that the race would be pancake flat, but a quick look on Strava the week before revealed rather an ominous set of elevations. My fears were confirmed when the race briefing explained that the 10k route would be a 3 lap course… 3 laps=3 hills! It was like being back at Graves Parkrun (without the friendly Sheffielders, obviously)! The course was, however, beautiful, taking in the stunning Maritime Museum during one of the only straight and flat sections. The event was brilliantly organised, too: although the park is shared with other users, a lot of thought was given to the organisation, there was a free photographer, and the complimentary flapjack was outstanding.

I’d definitely recommend this one. In fact, RunThrough are back in Greenwich on December 22nd, and again on January 19th – hills and flapjack, it’s a home from home! 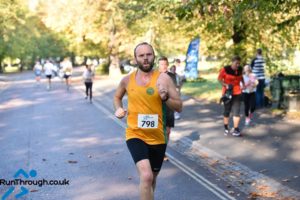