Between the York Marathon and 10 miler, the Manchester half, cross country and a handful of other races, it felt like I was the only Strider who hadn’t signed up to race on the 14th October. The slightly confusingly-named Sheffield City 10k at Rother Valley Country Park caught my eye on Saturday afternoon and I made a spur of the moment decision to enter.

The course was two anti-clockwise laps around both lakes – the parkrun course in reverse – with the addition of a slight odd lap of a marshal to make the distance up to 10k. Rother Valley has a reputation among local parkruns for being the fastest course, with an almost completely flat route by Sheffield standards, so it was possible to run a fairly consistent race – and it’s one that 10k PB-hunters might be interested in for next year.

What I didn’t reckon with, however, was the weather. Queuing up with no shelter in the pouring rain to enter, I’m sure I wasn’t the only one who considered just going home, and around the course the uneven path meant we were constantly dodging puddles, to say nothing of a short but hilly section over grass, which brought brief flashbacks of cross country races.

The other races and adverse conditions meant that the usual superhuman characters who run 10ks in half an hour or so were elsewhere, so as we started I stuck with a runner who knew the course well at the front of the pack (a position which still feels a little unusual) for the first 5k. As we started the second lap, myself and another runner pushed the pace a little bit and opened up a bit of distance from the people behind.

As our watches beeped for 8k, the other runner – who clearly had a lot left in the tank – kicked into a whole other gear and before I knew it he’d opened a massive gap and finished comfortably in the lead. Still, I’m pretty pleased with my second-place finish, and the two-lap course and wide range of runners made for a nice, mutually encouraging atmosphere as I went around the bottom of the lakes and into the finish.

Semi-embarrassingly, the weather conditions meant that my watch didn’t stop when I pressed it after crossing the line, so my finishing time is more of an estimate, around 37:30 – not that I’m too fussed about the exact time, as my second-place finish earned me an absurdly large trophy. Well done also to Simon Ross, Michael Twigg and Ady Good who joined me in the rain. And a special hand has to go to the poor marshals, who spent a good couple of hours getting soaked but provided cheerful support throughout!

[Note: a Facebook post on the event page suggests the organisers aren’t able to publish results as the rain damaged whatever system they were using.] 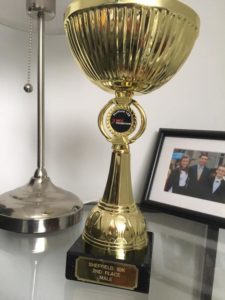