A race needing little or no introduction to anyone reading this, but which deserves one anyway, is Sunday’s Sheffield Half Marathon.  Many people in the club will have had some level of participation in this event down the years be that as a competitor, volunteer or supporter but, for those who haven’t, read on!  Even without the regional bias of it being in Sheffield, it has so much to recommend.  One of its unique selling points is of course The Hill, for whilst the route starts in the city centre, the climb up Eccleshall and Ringinglow Roads onto the edge of the Peak District makes for a very challenging half marathon course, particularly over the first five miles, whilst at the same time showing off the very best the city has to offer.

Following Stuart Jones’ rallying call to Striders to amass on the City Hall Steps for the group photo and a final dash to the nearest loo (Wetherspoons, an excellent choice with very small queues), Striders began to disperse down to Arundelgate to the start pens, which weave their way back up around the theatres towards the Winter Gardens.  After a short delay for what was described as a “police incident on the course”, things got underway at 0940hrs and people settled in for the steady descent to Eccleshall road.  It was almost perfect running conditions; cool but not cold, bright but not sunny and a gentle breeze (unlike 2015 when I last ran this into a strong headwind for the first five miles.)  Support for the first part of the route was pretty much as it was for the full distance – excellent – with bands, music, and plenty of people all the way up Eccy Road.  A shout of “Not far now!” about a mile in brought an early smile, as did Stuart’s horn-blowing for every Strider as they passed him on the barriers surrounding Moore Street roundabout.  Unfortunately for me at about the same point I felt a recurrence of a calf niggle I’d picked up only on Friday and so with a knot of pain on my left leg now keeping me company, I felt it was probably going to feel a little bit further than it was.

Hunter’s Bar signals the end of the ‘easy’ part of the climb, then the serious ascent kicks in to Banner Cross and beyond, before a right turn onto Ringinglow Road.  Once past Bents Green, although still climbing, the terrain does level out a little and there are a couple of moments of respite to catch one’s breath for a few seconds.  It then becomes a battle in the mind as the rest of the climb is laid out in a straight line ahead of you as the city is left behind for the countryside.   There’s a mile ‘sprint’ segment here but I paid little attention to that, instead focussing instead on my min/mile in an attempt to make up some ground on my 2015 time early on.  The crowd naturally becomes more spread out here but the encouragement is just as emphatic and welcome.  This climb, almost 900ft in a little over four miles, is a stern test indeed but runners are rewarded with the knowledge that by the time they reach the turn onto Sheephill Road, the worst is over and the descent back down into the city isn’t far away.

Views from Sheephill Road, with the Peak District to the right and Sheffield to the left, are arguably the best along the route, no doubt a key consideration in the choice of position for Goldstar’s Striders Support Flashmob.  I was still harbouring a very feint hope of a 1:39 but I was caught and overtaken along this section by our two 1:40 pacers and to be honest my heart sank a little.  Turning onto Hathersage Road I tried my best to keep up with them.  I managed it for a short time, registering my quickest split of the day at 6:53 but as the course leveled out again in Dore I knew I wouldn’t be able to keep it up and they began to pull away for good.

Rejoining Hathersage Road and Eccleshall Road, crowds were building again.  There was an increasing number of jelly baby-grabbing opportunities here (one of which I missed and ended up going back for, losing a few precious seconds!) and the shouts of encouragement continued to build all the way back down into the city.  With ten miles on the clock this would normally be one of the tougher parts of a half marathon but in Sheffield the efforts of the first 10k are fully realised and this is probably one of the best parts of the race.  As the noise swells and the descent from Banner Cross kicks in there’s a chance to push as hard as possible down to Hunter’s Bar.  It’s hard to underestimate the combined impact that the descent, the remaining distance and the shouts of “Come on Strider!” (something I didn’t have in 2015 as I hadn’t joined the club back then) can have at this point in the race.  A great experience.

I had a feeling that a pb was on the cards and was deliberately ignoring my watch as we crossed the roundabout on Moore Street again for the final half mile but the pain in my calf was starting to feel like it might turn to cramp and I had slowed a little.  However, turning the corner to the finish line I was delighted to see that my more realistic target of 1:42 was well within my grasp and I crossed the line at 1:41:24 for a three and a bit minute h/m pb.  I might have had 1:41:15 if it weren’t for those elusive jelly babies.

129 Striders are listed, at the time of going to press, of having competed.  The link below will take you to David Bownes’ report and full results list, which may be updated through the week.  Well done to everyone for a truly fantastic event.

Sheffield Half Marathon 2018 Result and Report 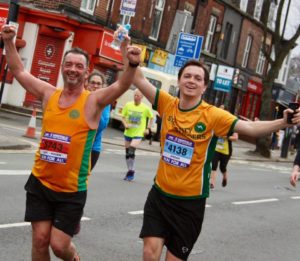