Snowdonia trail marathon is a 26.2 mile (or more close to 27 mile) race from Llanberis in the heart of Snowdonia national park around Snowdon, with a final ascent and descent of the highest mountain in Wales at around the 18 mile mark. And no, you are not allowed to use the train.

Talk of the marathon has come about regularly in Striders circles with green and gold vested runners taking part in the event for the last few years. Said talk often involves memories of pain, discomfort, and the words ‘never again’. However there are still some repeat offenders who have accepted the challenge more than once with Rob Davies, James Norton and Matt Gibson all returning for more pain, discomfort and uttering of the words ‘never again’.

I however was untarnished by previous experience, and being young and naïve, thought the sound of a marathon up Snowdon had some element of fun in it. Like a school away weekend we bunked up together in a dorm near Llanberis, and had a few beers the night before with conversation generally revolving around cramp. I started to get nervous about this particular runners ailment. I had never had cramp in a race until 3 peaks this year, and with a similar course profile (i.e. a lot of flat leading into steep climbs) I was worried about a repeat episode. Rob was stocking up on salt tablets, and I was just hydrating as much as possible. James kindly provided us with a hearty bolognaise which went down very nicely, and set us up well for the next day.

An early night and early morning. It was race day. Most people had breakfast, Rob had more salt tablets. He was starting to shrivel up like a doomed slug who had been attacked with the table salt. We met up with fellow marathoners Jill Davies, and Matt Gibson at the start, along with Heather Wallis and partner who was doing the equally challenging half marathon.

By the time we started the Ultra runners had already been out for 2 hours. I started off with Matt Williams both of us keeping the pace steady. I decided I would be very disciplined and keep the pace slow as I knew that it would be a very tough last 8 miles. Running on the roads out of Llanberis we headed upwards past the YHA and onto the main track running up to the col between Foel Goch and Moel Cynghorian. There was a large number of people running up the hills already, but we were in it for the long game, and walked up the short steep hills with the confidence of taking places back later. The day looked like it would be a hot one too and going out to fast would bite me in the bum.

The first few miles went by nicely, smiles still on peoples faces as we climbed steadily up to around 500 metres. A nice descent through fields and track brought us to the first checkpoint. One of the nice things about the Snowdonia trail event is the presence of checkpoints with electrolytes food and water every 4 or 5 miles. It is a very well supported and organised event. All was going well until I got running at the same pace as a guy from Wolverhampton who wanted to tell everyone about all the past races he had done and injuries he had. No one asked, or replied to him either. Time to shake him off.

Apparently this part of the course was a mudbath last year, but after the recent weather there was no real mud in sight. At mile 7 the route flattens out for a good 10 miles. This was the section where I wanted to be disciplined and keep it slow. At checkpoint 2 I spent a good 3 or 4 minutes trying to and failing to open my bottle to top it up. I managed to open it a minute after leaving the checkpoint! Matt Gibson caught up to me, and it was nice to plod along with him for a while. He kept calling himself a fat overweight golfer, but he was on for an easy 1 and a half hour pb at this point and smashing his target time by over 30 minutes.

Some lovely scenery and lake shore paths brought us to checkpoint 4 at mile 17. The Ultra runners were also alongside us at this point. Matt advised that the climb would begin after a couple of miles so I prepared myself and gave my legs a talking to. In the distance I saw the familiar backside of Strider Rob Davies. Catching up it was unfortunate to hear that the salt tablets had not worked and the cramp was kicking in pretty painfully.

After offering some of my sandwich there wasn’t much more I could do so I plodded off, and onto the climb to Pen Y Pass. The plan had worked as my legs were feeling strong and the initial climb felt good snaking up around 300 metres to the Pen Y Pass Youth Hostel. The checkpoint had a further lovely array of electrolytes, fruit, sweets, cake. The marshals were brilliant all the way round. I spend a good 5 to 10 mins stocking up, and upon leaving was pleased to see Rob had already made it up to Pen Y Pass despite cramping calves. Hero!

The last time I went up Pyg Track I figured was 10 years ago. I think gradually over the years its steepness had been diluted. The legs started the really tire, and the preceding tweaks in the calfs started to get me worried about cramping. Every small bit of scramble brought the runners to a slow flumping over the rocks in an effort to eat away at the total 1000 metre climb in one go (brutal at the back end of a marathon). We were told by the race organiser that under no circumstances should we go across Grib Goch. Passing the sign for Crib Goch I was pretty certain that there was no temptation there whatsoever.

It was now a grind to the top. Tourists were cheering on the runners. I was slowly eating all of my food and keeping hydrated with a good litre of liquid on the way up. Up, up to the famous double zigzag which symbolises the nearing of the snowdon summit, and into the cloud.

A couple of shouts for Sheffield and Striders at this point which was nice to hear (whilst managing to stylishly trip over while thanking them). Upon reaching the top, we turned for a 3 mile run down the Llanberis path to the finish. Somehow though, I got the legs moving and started making steady progress keeping up a good pace. Twice I had to stop to stretch out other runners cramp, yet my calves still played nice. I also discovered that I had definitely taken on enough food as I realised I felt ‘full’. A slightly odd feeling when running. Hitting the bottom of the rocky track it was onto a final steep descent on tarmac, and my legs felt good. I opened up and ran more comfortably on road than I ever had before….until I hit the bottom and realised that instead of popping out near the finish where I thought I was, we popped out a good mile from the finish through undulating woodland.

The imminent finish line, and fast descent crushed me both physically and mentally. It felt like a long last mile. I caught up with Martin who was staying with us, and willed him to get running again. I couldn’t cross the line before him when he had spent 26 miles ahead of me!

We ground out the last mile and ran across the finish line to see James who had crossed 6 minutes before us. Turned out I started a few seconds after Martin so despite him crossing the line first I beat him by 2 seconds. Sorry Martin!

Orange segments had never tasted so good. What ensued next was 3 hours sat in the sun, trying to find a comfy position to rest my legs, including on all 4s, face down horizontal, walking around, and flat on my back. I was shot. We saw Matt Gibson come in under 6 hours; 30 minutes ahead of his target time. Rob Davis also got a 20 min pb despite cramp in a monumental effort. His calves didn’t stop pulsing for 1 hour after. Matt Williams came in around 6 hours 15 saying ‘I feel alright actually’. I think he changed this opinion after having stopped for a few minutes. Jill Davies also came in under 7 hours, smashing her target by over an hour. James Norton got a pb, coming in first Strider to win the inaugural Barron Goldsack trophy (some Whisky and a tankard paid for by their accomodation fee when they couldn’t make it). Nice one James!

Similar achievements for the Half Marathon runners with some great times, and the award for medic of the day going to Heather partner Mark, who sat with someone with concussion and some broken ribs for a good 2 hours waiting for a helecopter rescue, before then completing his half marathon. Bravo, and I hear a very heartfelt thanks has been received from the injured runner.

No day in Llanberis would be complete without a trip to Pete’s Eats, where I nearly fell asleep in my massive portion of Ham, Egg and Chips. All in all, I think all the scare mongering and warnings about the difficulty of this event did me some good. It was bloomin tough, and one of the hardest races I have done, but it felt like a good run, and from a look at all the pbs and smashing of targets, all Striders had a great day.

One that everyone will recommend….but I’m not doing it again.

Well done to the two striders who completed the tough half marathon course. Massive shout out to Heather’s partner Mark, who helped and kept warm a runner who had an accident and head injury on Snowdon for 2 hours while waiting for the helecopter rescue. He then went on to complete the half marathon. Mark has been given the delightful present of free entry next year. That means Heather will have to do it again too.

1st male went to Jack Oats in 3 hours 37 mins 23 seconds, a respectable marathon time let along with Snowdon at the end of it.

Well done to the 6 Striders who completed it. 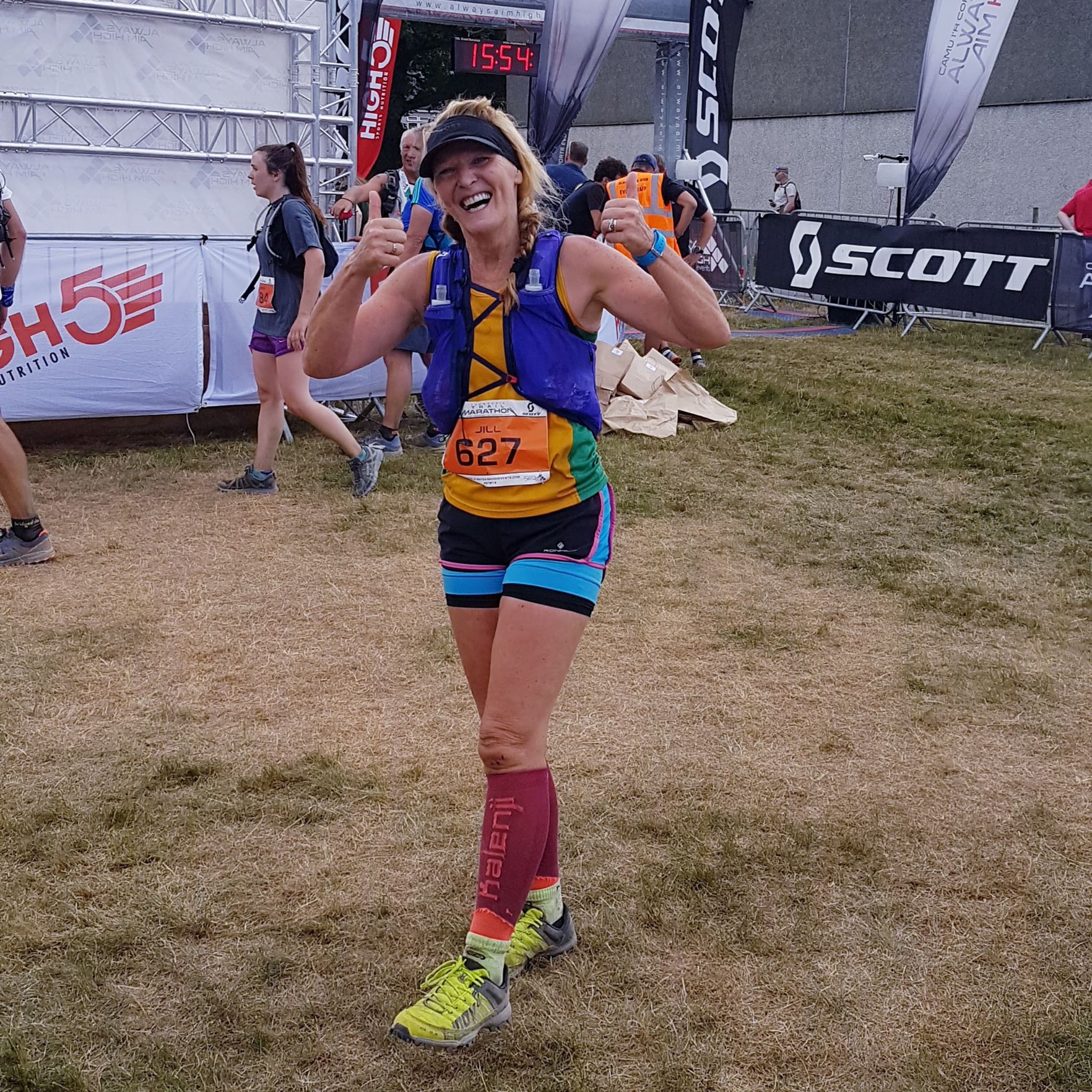 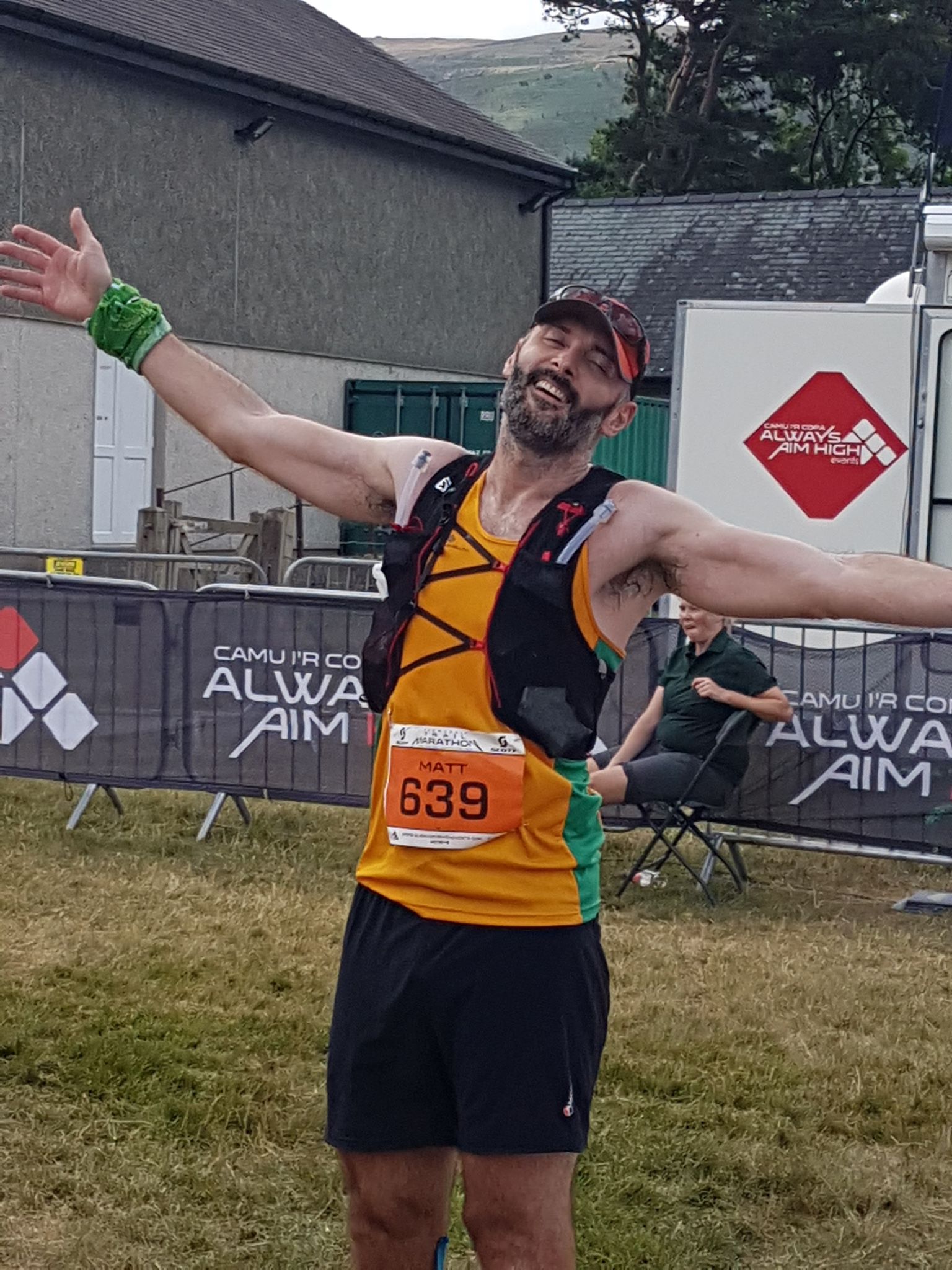 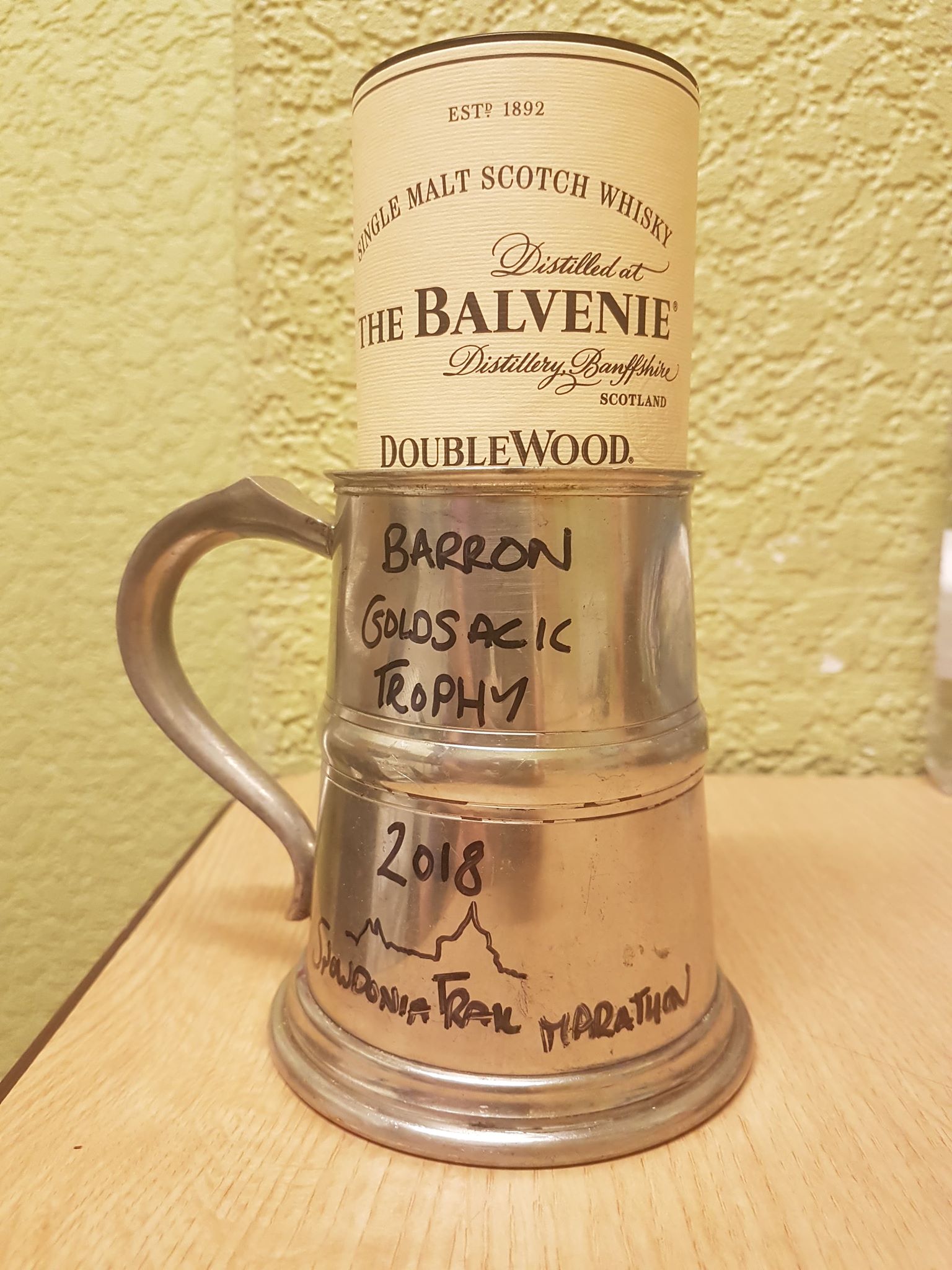 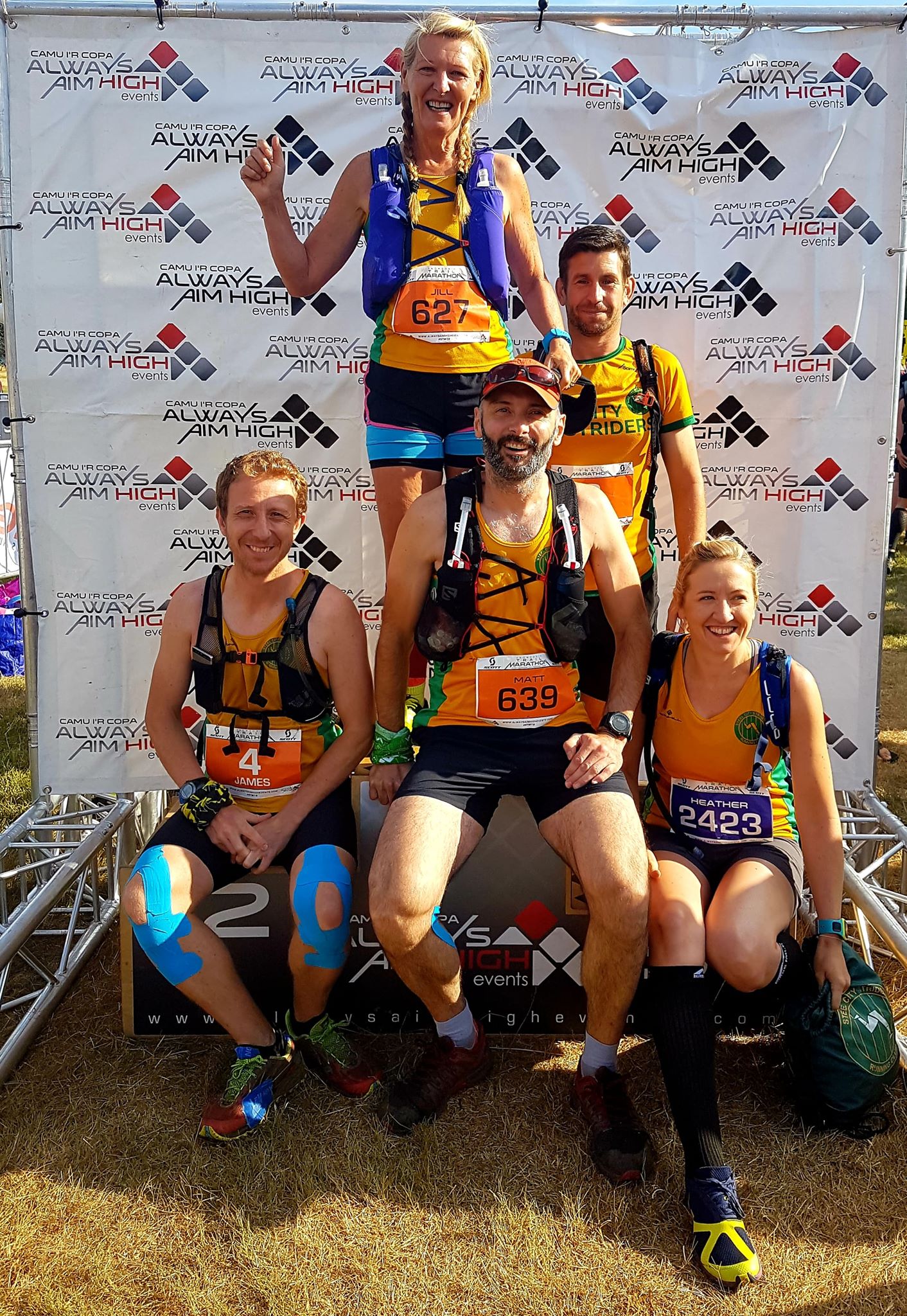 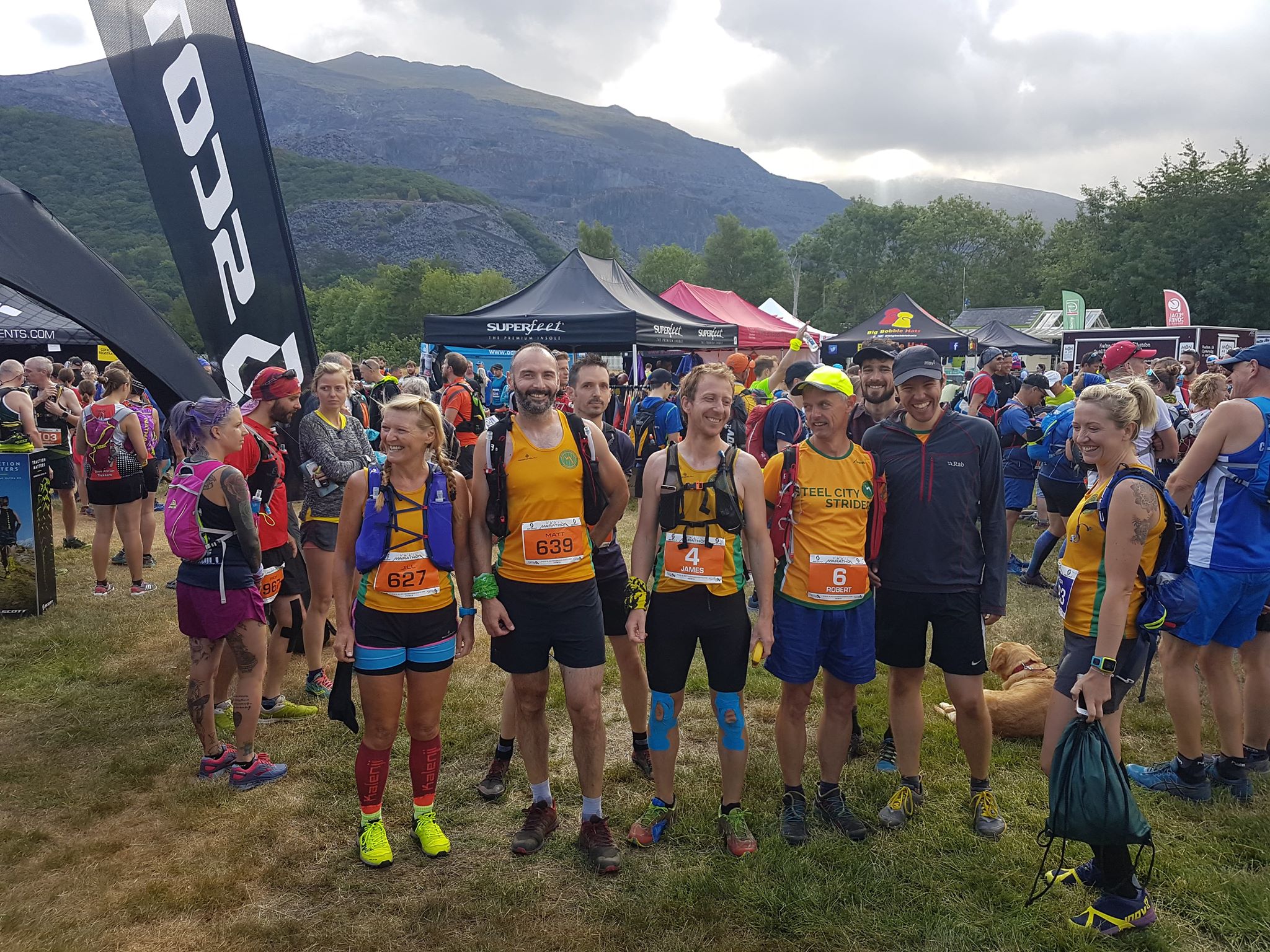 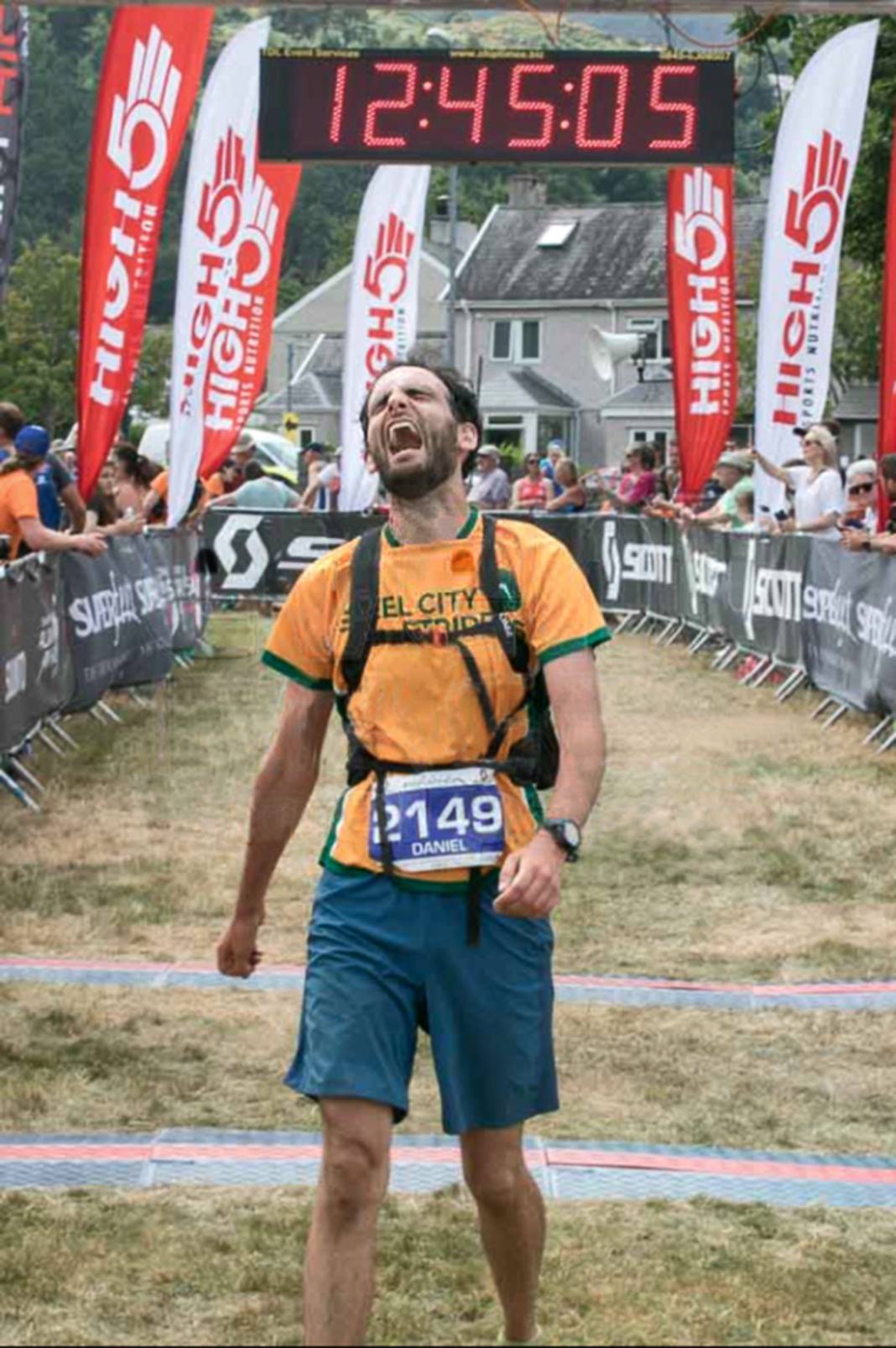