This year’s Brighton Marathon was the 8th running of the event with the weekend featuring a 10k in addition to the full marathon competed by just shy of twenty thousand entrants, making it the second largest marathon in the UK behind London. (Are you sure? Other sources say 12,000 ed.) The weekend included an event village on the sea front with a host of pop-up shops and food outlets and an estimated 150,000 spectators on race day. Weather permitting, it makes for a fantastic experience and a real feeling that runners have taken over the city.  The route starts around one mile north of the High Street, running towards the sea front to Rottingdean, before doubling back to Hove and Shoreham Power Station before the final stretch finishing at the Pier.

I’ve been sat on this report as knew there was a fast strider on the course and had been waiting for full results to find her. Congratulations to Lucy Broom setting a blindingly fast PB at 3:14:14 and finishing as the 27th woman overall, and 11th in category, a fantastic run and a real credit to the club! My wife had clocked Lucy and out of sheer excitement proceeded to scream “SHEFFIELDDDDDDDDDD” and “YORKSHIREEE!” every time she flew past. 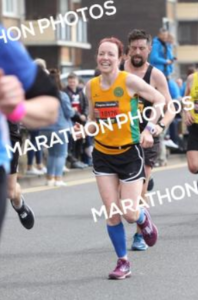 Lucy causing excitement in Brighton wherever she went..

For me, it was my first marathon and the race was the reason I joined the Striders. I had run on and off for a few months after giving up smoking but have always been a sucker for punishment so signed up to this long before I conquered a respectable 10k time. I ran to support a charity that supported a terminally ill friend and it gave a great sense of meaning to the event.

I can honestly say, the last twenty weeks of training with the club have changed my outlook towards running, ambition and mental strength. When people said “running a marathon is one of the hardest things you’ll achieve”, in my ignorance, I shrugged it off. James Fulcher assured me: “There will be tears”. The tears came, but oddly, in the first mile. The race starts in Preston Park, conducting a lap of the perimeter before heading towards the sea front. I have never experienced such vocal support, and (as I’m sure those who ran London last weekend can vouch for) it’s quite something having strangers support with such passion. After a winter of snow, ice and some lonely late runs in the dark to Chesterfield and back it was a beautiful end to a long training program. 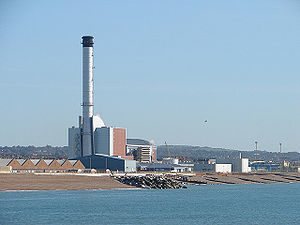 Personally, I had hoped for anything between 3:15 to 3:30 and finished in 3:28.  A week later and I’m starting to feel the time doesn’t matter, I set a time to beat for the future.

The race was won for the second year in a row by Stuart Hawkes, Tipton in 2:22:33 after a titanic battle with second placed Dan Nash, Cardiff, clawing back a two minute gap to win by a mere 22 seconds. The first woman was Helen Davies, Brighton TC in a time of 2:35:41 who won last year too.

Full Results are on Run Britain Irritatingly the official site only gives the first ten in category and then the facility to search for athletes by name or race number. 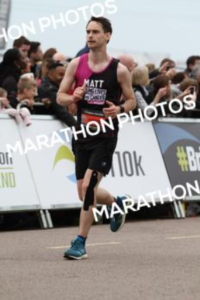 Matt sporting what we assume is his charity outfit. What Matt didn’t mention in his report was how he was literally dragged over the line by two fellow competitors to make sure that he got under 3:30. (ed)