This five mile road race in the village of Bassingham, somewhere between Newark and Lincoln, is on pancake flat  rural lanes with course records of 24:41 and 28:12 standing as testament to its quality. Speaking with Emma Brear after the race, she echoed the general sentiment that it was hot, far too hot. With a 2.00pm start time and only a slight breeze it felt warmer than the official 24 degrees with the heat bouncing off the tarmac and hardly any shade. Not good conditions for racing but this didn’t seem to bother Sam Brown who smashed his previous pb by nearly two minutes. Signs of a mis-spent youth methinks. Meanwhile new kid on the block Tom King is establishing a portfolio of personal bests with an encouraging 30:14 and although he was disappointed not to have broken 30 minutes we’re certain that more is to come as his race experience grows. Emma tried to argue that she also ran a pb on Strava but we remain to be convinced. 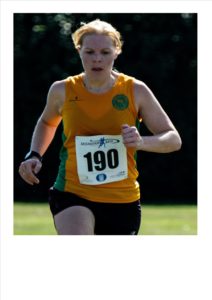 Emma Brear with concentration maintained right to the finish line.

The heat didn’t bother those at the sharp end of the field either with the race won in 25:50 by Shane Robinson (Lincoln Wellington) by the slenderest of margins and providing much entertainment for the spectators. First lady was Cali Thackery (Hallamshire) in 29:19 now back in the UK after a spell in the USA.Another performance of note was an astounding 34:35 from Vic Shirley of Northern Athletics who tops the UK M75 rankings for 2018.

Race organisers Witham Runners were struggling to find a main sponsor with the result that there was no souvenir mug although we did get a post race flapjack and brew plus a goody bag – a re-usable Co-op shopping bag and very useful too. Personally the lack of post race goodies didn’t bother me for what we got was a competitively priced, quality race with chip timiing, organised by runners for runners with profits going back into athletics. Hopefully the record field of 226 finishers helped ease some of Witham Runners sponsorship issues.