I signed up for the Southampton Marathon on a bit of whim last year. While I had no interest in running a marathon, at that point even a half seemed a very long way, at some point in my life I want to do an Ironman. My theory, you can’t sign up for an Ironman without running a marathon first, well unless you are proper mad. The Southampton marathon was local early season marathon, which meant I could put in the long miles in during the winter, while the weather was too bad to cycle. Even so training had been very touch and go, especially with the snow that visited us a few too many times.
Frustratingly, I picked up an injury after the Sheffield half marathon, which meant I could only do one run in the final 2 weeks before the race. I knew it was bad because I had a sharp pain when I walked sometimes, so decided to sit out the Derby 10k last weekend and stick to riding my bike in and out of work. I also managed to find some motivation to go for a swim on the Sunday evening, however when I got to David Lloyd the indoor pool was closed. The outdoor pool offered a slightly different experience and I’ll tell you one thing, I didn’t stop!

Luckily Toby gave me a pretty good massage when he came up. As the week went on it started to improve, and by the time I left Derby on Friday, I had made the decision I would give the marathon a go. If it ended up being too bad I would just stop, after all I am going to Mallorca in 2 weeks and really didn’t anything to quash my Sacolabra dreams.

On race morning I had my normal breakfast, bit of a sucker for a bowl of porridge me. But unusually, I decided to give the morning coffee a miss. Didn’t want to risk any stomach issues as that would have been upsetting to say the least. I packed a banana for half an hour before the start and set off to town. Luckily mum gave me a lift into town before shooting off to Pilates, and I got there with plenty of time to go. The temperature at this time of day was actually quite pleasant, however this wasn’t to last and by the time we actually set off at 9 it was setting out to be a lovely day to spend at the beach.

I had done a little bit of a warm up and I could feel my bum twinging, which I have to be honest didn’t fill me with much hope for the next 26 miles, however I tried not to dwell on it and set up to start. Even though I hadn’t planned to hit it out hard I did decide to start right at the front.

We were off at 9 o’clock on the dot, and the majority of people surrounding me set off at a pace that was probably too fast, and I caught many of them back up a few miles in. The first few miles were a lot of fun, warming up and soaking in the atmosphere. The streets were lined with people, full of energy which was infectious and really bought a smile to my face. The part of the route most people were dreading was the Itchen bridge, I actually quite enjoy running over this bridge, as it’s a very gradual climb, perfect for getting into your groove.

This is where I met the guy I ran the first half of the marathon with. I didn’t grab his name, but we were nattering away, and he was a real crowd pleaser. The course ran along the sea, before looping back up and over the bridge for a second time. The sea provided a very welcome, yet all too brief, gentle breeze. At this stage the children with jelly babies began to emerge, and hi fives were being given left right and centre.

Fuelling this marathon was something I hadn’t really given enough thought to. Due to not having done many long runs I hadn’t had much chance to experiment. I decided to take 3 gels with me, have the first one after an hour and then every 5 miles from then on. There were marshals handing out gels so I didn’t have to take lots with me which was great.

Having my name on my bib meant I got cheered on by the public lining the streets. We were very lucky to get to run through the Saints stadium, and the guy I was with managed to get a pleasingly cheesy photo of me. The rest of the route was fairly uneventful, except from motivating one guy to keep running. As he came back past me for the 5th time with a mile to go, I told him if he stopped again I would be kicking him to the finish. I’m happy I didn’t see him again, as that means he had a strong half marathon finish.

Onto lap 2 I jokingly asked one of the ladies whether she wanted to accompany me on the second lap and she looked almost offended as she explained there was ‘absolutely no way she would ever do that’. Running up the Itchen bridge for the second time seemed slightly harder than the previous attempt, but I guess that was to be expected. Sadly, it was at this point that my running partner came to a complete stop. I hadn’t seen him take on anything since we started so I guess he must have just run out of energy.

I passed a unicorn walking the half route, and the motivation from everyone around me was unbelievable. By this stage it was unbearably hot, and I could feel myself getting dehydrated. I was drinking at every water station, but they weren’t frequent enough. Anyway, up and down and back along the seafront. It was at this stage I saw some of the marathon runners coming back the other way.

Back into town and through the stadium again my legs were starting to get very heavy and the pain in my leg and bum was getting worse. At this point I slowed down a little bit as the biggest goal for me was to make it to the end. On the second lap I also saw my mum and Mark who had to be driving in the car at that stage, good timing or what.

I find with events where you are in pain its best to just smile and distract yourself, take extra hi fives, say hello to people, start singing, eat a jelly baby ect. People yelling, Rachel you are 3rd lady was another push in the right direction, as I knew if I stopped there was a chance someone would have overtaken me. The second half of the course went uphill a bit more than I would have liked but with hills you really do just have to grit them out. After all, what goes up must go down. I started to pass a lot of guys that had stopped to walk again really driving me forward. I knew if I stopped to walk I wouldn’t get going again as my bum would properly flare up. This was confirmed by the fact walking is quite painful now!

With 3 miles to go, I remembered the advice I had heard many times before, only a parkrun to go! We all know how easy a parkrun is right? To add a bit of drama to the day, I nearly got run over in the final mile, as a driver decided he was going to ignore the marshals and drive over the closed roads anyway, his specific words: ‘I don’t care if I get arrested and run over these bloody runners.’

As the finish line came into sight, I had a second wind of energy and the adrenaline was masking the pain. I managed a beautiful sprint and I saw mum and Mark cheering me on to the end. Over the line and I had finished which was a massive relief. As I came to a stop I could barely walk, my legs felt like jelly and I couldn’t really decide what hurt more.

The most adorable little children put a medal round my neck and told me I had come 3rd Lady. I have to say completing a marathon gives you such a huge sense of pride, I sometimes forget how much training, fitness and dedication goes into these things. As I was picking up my event t-shirt, I saw my dad hiding. That was such a great surprise as I didn’t expect him to come. There is something extra rewarding about your parents being proud of you. Mum told me it bought her to tears as she saw me running down the finish line, which was really special.

My dad had bought my little sisters micro scooter as he had to park so far away from the race village. This actually turned out to be a good thing for me as I could then scoot along rather than walking… Dad also treated me to the event hoodie which will be a great momento!

Eventually we located my mum and Mark, much photos were then taken before heading to the stage for the presentation ceremony. Being the scatterbrain I am I hadn’t told them I was there so they read out my name, and I walked onto stage and got given the plaque for the lady in 2nd place…

On the walk back to the car Mark treated me to a cold diet Pepsi, beautiful on a day like today. The traffic leaving town was mental and it took us over an hour to get home and by this point everybody was starving.

I did give mum the GoPro in the hope she would get a good video over the finish line. However, what I actually got is 3 videos of mum and Mark debating how it works. Mum’s lines starting ‘well Rachel told me.’ Oh, the technology divide.

I enjoyed James Spray’s sum up of the marathon today: ‘I’ve trained for 6 months in the winter and had a heatwave on race day.’

Overall a fabulous day, worth the pain 100%. 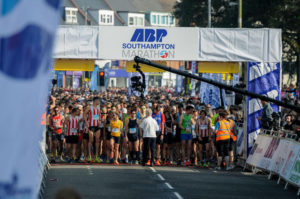