Me and my new wifey Emma Norton choose our honeymoon destination as New York after seeing the prices of flights and deciding that it wasn’t as expensive as we thought it would be although yes it is the most expensive city in the world so we came back pretty skint.

We decided that doing a race whilst we were over there would be ideal and we started looking into our options. Staten Island Half seemed to be a good option as it fitted into the time when we wanted to be over there and was run by the New York Road Runners so we knew it would be a very good and well established race.

Luckily, next to our hotel, was a Dunkin Donuts were you could pick up a bucket of coffee for next to nothing which helped with the journey.

The race start area, being America, was a little different to the UK as in you had to put all of your running stuff that you wanted to check in into a clear bag provided by the race and then to gain access to the start area you had to go through some security scanners. Definitely a different experience.

Once I got to my pen, which was pen A, I installed myself 3 rows from the front and listened to all the pre race talk from the announcers a few feet away, then listened whilst they played the national anthem before the start of the race.

The course itself I had heard had a bad hill around 8 miles in, otherwise wasn’t too bad. This was true in a way, however the course tended to be rolling throughout and had more hills in than was mentioned.

I didn’t take any of the Gatorade on board during the race as I didn’t want to risk it as I hadn’t had it before.

I was after a certain time, as Staten Island being a New York Road Runners race, is a guaranteed entry race to the New York Marathon so my target was sub 1.23 which I was hoping after getting up at 4.50am and a long flight a few days before could still be possible.

The qualification for New York is slightly different and it took me a while to get my head round so even though I have run the qualifying time for a full and a half in the UK numerous times this year it still doesn’t guarantee entry it only completely guarantees entry if you run it in a New York Road Runners Race. Otherwise you have to wait to see what guaranteed places are filled during the January to February window and after that any spots that are left are dallied up between who else has run the time but not in a New York Road Runners race.

I cautiously paced my race knowing I would be tired and managed to pick it up from 10 miles, however Emma started suffering from the bad hill at 8 and the last ½ mile uphill kick to the finish meant she finished outside of her pb which she was running well under until that point so she finished quite disappointed.

The race, although I enjoyed, it isn’t one I would do again unless it was local race to me. If I do another half in New York I would do the United Airlines Half which looks pancake flat and also runs right through the heart of Times Square. 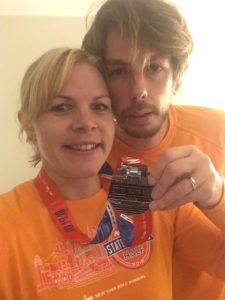