This felt like Cross Country under false pretences; it did not provide the super-soft ground conditions needed for those with new spiked shoes to wear them or claim their absolute necessity. (And so they have to be snuck home again, unused, hopefully unnoticed.)

Campsall ‘Country Park’ lends itself to very gentle cross country when the weather is like this – the sun shone and so every (male) Strider was in the traditional shorts and vest. (The ladies were pretty much the same, it should be noted.) The ground was barely giving and so trail shoes were more than enough all the way round a big field (riddled with hoof prints and holes), a couple of woodland paths, an open field and three short climbs on rolling angles. Two years ago the conditions were so contrasting (mud, mud, mud and wet) that I could barely fight the adverse cambers on each turn but this time round we were knocking out 10k times not too much slower than road racing.

The interesting route plan of three large laps (for the senior men) followed by one short lap to finish made for a Trunce-like queue at the first passing of a stile / squeeze but made the embarrassment of being lapped much less obvious or painful somehow. The short lap caused all sorts of problems, with it being a lap and a half. Some ran a short lap short, some do not feature on the results list, and a bogus number has appeared. But none of that matters because we all enjoyed a really nice run in fabulous weather.

Unlike some of venues coming later in the season (Harewood House and Lightwater Valley particularly) there was very little hill to overcome and nothing felt hard.

There was a ton of cake (including malt loaf, Cara), green tea, hot chocolate and a successful tent collapse afterwards.

Fixture 3 is at Cannon Hall Park in mid-November. I can only recommend it highly. If it were on Trip Advisor I’d be awarding five stars in all categories (except peeing in the rushes (no spelling mistake)). 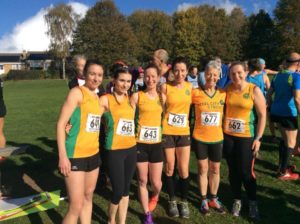 Winner of the women’s event was Nicola Devine, Rotherham, in 22:19 but we must mention Caroline Brock and Frances Roberts who both finished in the top ten with Nicola Galley in 18th; a job for the statisticians as we’re not sure if the Striders ladies have ever done so well at XC before. Is Dot Kesterton really a F65? Despite the autumn sunshine the field was slightly smaller than Clifton Park with 102 finishing their 6000m event.

*Official results state that this was James Smith but he looked very much like Ben Jones.