There is something a little bit magical about the Spring Wednesday night 5-milers. They’re always very sociable; a chance to catch up with fellow club member as well as friends from other clubs. But on the other hand, they’re often highly competitive and not just at the sharp end; even those of us back in the pack have a good sense of who we may have a chance of competing with, and by the end of the series, you’ll usually know pretty well where you are in relation to fellow club runners.

This was supposed to be the third in the series of four races that make up the South Yorkshire County Athletics Association 5 Mile Road Race series, however it has now become the second of three fixtures after the abandonment of the Lodge Moor fixture at the start of April in thick fog. The weather on Wednesday night was considerably kinder. After a day of capricious and at times, torrential showers, it stayed dry for the duration of the race.

The Worsbrough course offers great variety; the first mile or so is broadly level, then followed by two decent climbs, the second of which, immediately after the M1 underpass, up towards Birdwell, is definitely the crux of the course. From there a short level section through Birdwell leads to a long and very runnable descent down Sheffield Road back towards Worsbrough Mill.

It was great to see so many Striders taking part on the night and no doubt there will be plenty there for the final event at Penistone on the 9th May. And if that doesn’t sate your need for Wednesday night racing, there’s always the PB friendly Askern 10k the following week, though you will have to pay for that one!

Some of you may have already seen the fabulous photos that Steve Frith took of runners as they passed under the M1. The full set can be found at;

Steve consistently supports local running events and takes stunning photos. If you choose to use one of his shots for your Strava stream or Facebook page, please do consider donating to his current cause, the Woodhead Mountain Rescue Team (details via his website). 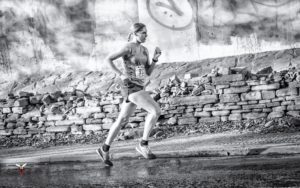