All good things must come to an end, as both Geoffrey Chaucer and Nelly Furtado tell us, though I suspect neither of them had the SYCAA 5 mile series in mind. Their loss.

This year’s truncated series reached its grand finale at Penistone, more specifically the Memorial Ground, home to Penistone Church FC (they play in the Northern Counties East League Premier Division – someone asked me on the way there). The field assembled in pretty much perfect running conditions; cool with only a slight breeze, rain seemed possible but never materialised.

There was still plenty to play for going into the final race too. The All Ladies team was placed first after two events, but had the narrowest of leads over Totley AC. The Vet Mens team also had to defend their third place position with Doncaster AC looking to steal their podium position.

The Penistone course is, for my money, the best of the series. With around 130m of climbing it’s not as quick as Brodsworth, but like Worsbrough, the majority of the climbing is over by half way and the return half of the course is potentially quick; a brief dig into Strava showed plenty of folk setting new records for their quickest 2 miles on Wednesday night. It’s also a picturesque route and one where you get a real sense of the field ahead and behind you as the race unfolds.

It was also great for Striders to get so much encouragement from fellow club members on the night, thanks to their willingness to volunteer at short notice; Richard Pegg’s so-called Marshal Plan (one for the Cold War History fans there).

There were lots of good performances once again; in the female competitions Nicola Birch, Tish Broomhead, Leisha Shiner and Letitia Hancock all placed in the FS top ten, Charlie Narozanska came 4th in a highly competitive FV40 field – she was also the first female Strider home in a time of 33.09, Mir Jansen was second FV50 and Helen Eberlin was also second in the FV65 group. Amongst the men, Phil Skelton was the first Strider home in a time of 29.14, placing 7th overall, Simon Bennett came third in the MV45 category and David Wilson placed 3rd at MV55.  In the team competitions, a strong Totley team pushed Striders into second place in the All Ladies competition, ahead of ten other local clubs, whilst the All Vet Men held on to their third place for the season.

And so another cracking set of races comes to a close. Thanks should be made to the team that organised this year’s events; Richard Pegg, Nick Burns, Chris Bannister 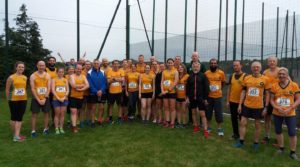