Having been too slow to enter Dewsbury 10k which then sold out (seems to be happening a lot to me, must be more organised….) I hunted around for another early year 10k to enter.

I came across a company running a series of 10k races at Tatton Park, one each month. I’ve done a race at Tatton Park before, which was so badly organised it was horrific, but this was with a different company and as they were doing one a month I thought it was worth a punt… it was worth the risk!

Waking up early to eat my pre-race porridge, I was feeling oddly calm. Usually pretty nervous before races, my husband even commented (post race) about how calm and not stressed I’d been! It’s about an hours drive to Tatton Park from our house, we got there just as it was turning light. I picked up my number, went to the toilet, got changed, went to the toilet again, had a little warm up and made my way to the start.

The number collection was smooth, the toilet queues were small, all the marshalls were saying hello and everyone seemed happy to be there! It was perfect weather to run in, cold but not freezing. They asked runners to line up at the start line in some sort of time order, first up sub-40 runners, not many people were moving so I took my opportunity to line up at the front.

My last 10k race was Dewsbury, which being a long course last year robbed me of a possible sub-40 (I will never know). I was hoping to get a PB today and run sub-40.

The course is nice, all on closed roads & paths within the grounds of Tatton Park. Some paths were a little muddy and there were some potholes but it was mostly smooth road. It did feel like a fast course, head wind on the way out so a bit of a push on the way back. I set off behind the fast men, and worried after a mile that I’d set off too fast, but I felt good so I just tried to keep up with the few men ahead of me, using them to shelter from the wind when I could.

At halfway I checked my watch again, my fastest 5k time, and I’m doing a 10k! I worried for a few seconds that I’d definitely gone off too fast and would soon be paying for it, but around this time a man from Burnden Road Runners starting giving me encouragement, running just behind me. I’m not sure how he could say anything as I couldn’t even speak to say thank you until we’d finished. It was good to run with someone at that point and try and keep on pace. I still felt good, hurting but strong, I knew I could get a sub-40. With 1k to go I was thinking 2 and half laps of the track, 2 laps of the track, which mentally helps me with distance as otherwise I’m useless! As we got closer to the finish I could hear some of the finish times being announced, 38.15, 38.18, thinking how far away am I, can I get to the finish before 39 minutes, no way that’s ridiculous, 38.33, I’m nearly there! 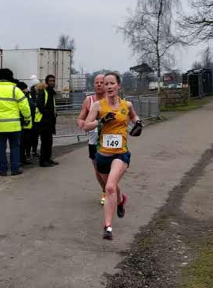 Perhaps the chap just getting outsprinted should have had his porridge as well.