Geordies hail from Newcastle, and Scousers from Liverpool. Cockneys are born within the sound of Bow Bells. The people of Middlesbrough are known, not affectionately, as ‘Smoggies’. The valley can trap the airborne pollutants from the many chemical and heavy industry works in the area, and this undoubtedly is part of the reason for the relatively high incidence of health conditions such as asthma, obesity and poor mental health. Life expectancy in Middlesbrough is 3.5 years lower than the national average. Nearly half of the town is made up of areas that sit in the 10% most deprived in the country.

Some serious things had to be done, and the Tees Pride campaign has been a long-term initiative aimed at health and activity.

Last Sunday saw the 14th edition of the race. Previous winners include Matty Hynes and Wondiye Indelbu on what is a fairly fast course, pretty flat, good surface and few corners (only six in fact, though each at 900).

It is a super event – the start / finish is like an open-air Peddler Market, but with two ice cream vans, bouncy slides and glitter tattoos. There are always plenty of faster runners for competition at the front and an awful lot of walkers at the rear.

My simple mistake, knowing that the start funnel was narrow and difficult to access except from the very back, was to go for a last-minute private sit down, if you know what I mean. This resulted in a three and a half minute difference between gun and chip times. I enjoy overtaking but this was silly – I did not do myself justice, really, with final placing.

Ben climbed the railing and pushed further forward (no toilet stop for him) but still had lots of overtaking to do.

A quick hard-sell on what Middlesbrough offers just on this one-lap course:

Don’t do it for the Goody Bag (which is a good-enough carrier bag, but held only a decent t-shirt, medal and pen). Do it because the atmosphere is nice and the course has PB potential. 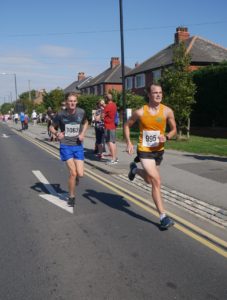 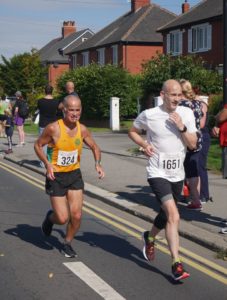