This is the ninth edition of this race which was set up by Mark and Joanne Robinson as a tribute to Mark’s dad who died aged 67 after a battle with cancer. Low on hype but with a big heart this event is great value for money and with everything that you could want from a race with the bonus of a fun run for the children.

The race starts at Brinsworth Comp and heads out to Europa Link, taking in a peek at Catcliffe before returning to the start. Not flat so don’t expect a pb.

The first (and last) part of the race is an 800m circuit of the school playing field and we could see a gold and green vest in the lead. He was in second place when we next spotted him coming back along the Europa Link but that was just before his race ended at 4km in a gobby heap at the side of the road having to endure the walk of shame back to the finish. Still, it must feel good to be in the lead, at least for a while anyway. 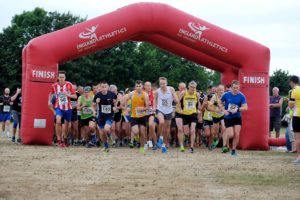 Number 23 is Jon Crook who was a member of Striders about ten years ago until his family and medicine took over whilst number 64 is Tom King who trains at Woodbourn on Thursday. Jon finshed in second place with Tom fifth. We’re hoping that they both sign the pledge in the near future.

After the race we did one of those just across the finish line interviews with Strider Jo Blewitt. In between breaths she said that she thought the race was a good one and the weather was perfect, well, compared to Dronfield anyway. We found out that she has been a Strider for six months and trains out of the Hillsborough stable once a week. Current mileage is 15/20 miles a week to stay injury free but is supplemented by swimming. 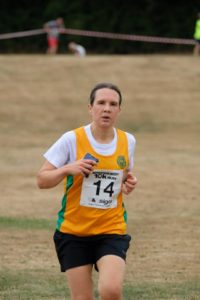 For the record, first lady was Joanne Bolton (Kimberworth) in 43:43 with Thomas Robshaw (unattached) bringing the men home in 36:37. Results are posted on the Brinsworth 10k Facebook page but I’ll try and find a way of getting them to those who don’t indulge. No clubs in the results, it’s that sort of DIY race.

Sam Brown said that he had a heavy cold and shouldn’t really have raced but rumour has it that he dropped out when he saw the purple and yellow t-shirt.