If you sit somewhere in the middle of a running and beer Venn diagram, grab yourself a beer and read on.  If you like fast flat marathons read on.  If the possibility of heat is your Achilles heel keep scrolling down your Facebook feed as you could be running in a scorcher.

Having realised I’d not looked at our family shared calendar 15 minutes after booking flights for the Valencia half marathon and having to cancel this I found myself searching for an overseas marathon costing under £200pp, the price I’d got Valencia for.  A friend from Stadium Runners, Steven, emailed me shortly after my initial mistake.

”I think I’ve found one. You’ll like it. The Great Breweries Marathon.” He’d got me at Breweries.

Starting and finishing at the Duvel Brewery at Moortgaat, half way between Brussels and Antwerp, the route also took in the breweries of Palm and Karneleit.  Sounded great – it’ll be pan flat and we don’t have to take it seriously. There was also the added bonus of a 25k run or walk, the latter appealing to our respective wives. Perfect. Flights booked and after some super friendly help via Facebook with the race organisers we booked our hotel in Antwerp.

With a couple of weeks to go I decided to drop down to the 25k run, my body not being in a good enough place to tackle the marathon. Even though this was meant to be marathon number 19, and therefore I should know how many km are in a marathon and a half marathon, for some reason I’d just assumed the 25k race was a half.  Having realised my basic maths fail I looked on the positive in that this was an opportunity to run a distance I’d not done before.  A guaranteed PB and therefore #PBeers afterwards (copyright Steven).

Having arrived to biblical downpours in Antwerp on Friday afternoon, the rest of the day were spent wandering around the city and sampling some Belgian beers.  With the average strength around 8% it wasn’t your ideal race prep. After an early night on Saturday (and a final Duvel night cap to carb load), we were at train station for 7am Sunday morning and 25 mins later we arrived in Mechelen, where a free shuttle bus got us to the Duvel brewery about 20 mins later. The race village facilities were some of the best I’d seen, in what looked and felt like a permanent event space in the brewery grounds. Two huge bars, a huge row of toilet blocks and plenty of urinals. With food vendors, DJ sound systems and well stocked bars it looked like the afternoon could be a lot of fun!

The races went off in four waves. Marathoners set off at 9.15am with the marathon walkers heading off a couple of minutes later. 25k runners set off at 11.15am with the 25k walkers finally leaving at 11.40.  We’d realised that Steven could be back and having a beer by 12.45pm, me around 1.30pm with our wives coming home around 5pm.  The potential for alcohol fuelled disaster was high!

The race set off to a fanfare of Europop, which seemed suitably placed on a scorching hot, cloudless day. We set off out of Puurs and away from the brewery, soon to turn off the tarmac roads and on to a trail path along some farmland. The route was a mixture of roads, pavements, cycle paths and the occasional “off road” section.  These were all marked before they started so you knew they were coming and as for off road, they were more dusty trail.  If you weren’t aware of them beforehand they could knock you off your stride but we’d read the race book and knew there’d be a few of these sections on the route.

After around 10k we hit Palm brewery, a stunning location in which you run up a driveway to a medieval looking set of buildings, supporters dressed in period clothing cheering you on, past a castle with a dried-up moat and through a courtyard and

“Oh there’s a man in a suit of armour to high five. He must be roasting!” 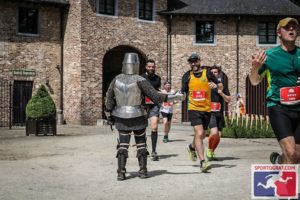 Next thing you find yourself running through the industrial part of the brewery, through warehouses and guided through a building by towering walls of beer bottle crates. Apart from the end of Frankfurt marathon I don’t think I’ve run indoors during a run like that before and it was a good break from the flat Belgian landscape.  Out of the warehouses and past the first bar where the walkers could stop for a drink (or three as we later found out!). 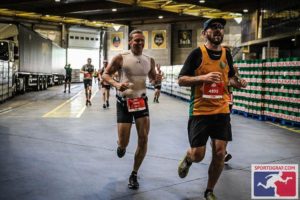 At 12k the route splits with the marathon runners heading off on an out loop and us 25kers heading towards Karmeliet. Although the support on course was minimal there were occasional supporters outside of their houses and in a number of the villages.

With Karmeliet passed (and more opportunities for the walkers to continue their all-dayer) it was around 8k to go back to Duvel. By now it was scorching and the taste of a beer was getting strong. With just under 2k to go the route ended up back on the outward part of the course and before you know it you’re heading under an arch, past a massive red D (for Duvel) and in to the brewery. With the course again lined with walls of Duvel crates you find yourselves guided through the warehouses, past the labs and finally the finish line (and bars) are in sight.

I find Steve and to my amazement he’s been stood for an hour in the blazing sun waiting for me to finish. He’s not had a beer either! Time to make up for that. 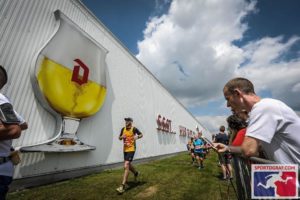 With a choice of nine beers (ABVs ranging from 2.9% to 11.5%) all costing two euros each – the same as a water and a soft drink! – and three beer tokens on your bib number it was an enjoyable afternoon. So much so we missed our wives coming across the line at around 5.30pm.  Ooops. But they’d had a great time with as much beer and cake as they could muster (they did muster too) at their respective brewery stops and annoyingly at a non-brewery stop too.  After a few more drinks and having picked up our finishers beer box (three for the 25kers and six for the marathoners) it was time to get the shuttle bus and train back to Antwerp.

While this may be a longer than usual race report, I hope it captures some of what the event was about. If you want to do a long race / marathon, don’t want to take it too seriously and you like a beer or two this ticks all the boxes. The opportunity to walk the distance was an added bonus which meant that all four of our party came away having had a fantastic weekend. I’d certainly recommend it and fitness permitting I’d like to go back next year to have a crack at the full marathon distance.