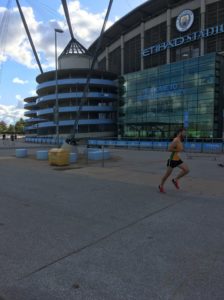 Alasdair Menmuir holding his own

Scenery: lots of reinforced concrete and a gas holder.

Conditions: Warm and blustery; a good washing day except for the spiteful shower that soaked some of the last leg runners. The moral is to run faster next time to avoid the rain.

Atmosphere: Electric, with a large, vociferous but knowledgeable crowd. The nature of the course led to multiple viewing opportunities for those out on the course whilst those in the stands could watch the race unfold from the leisure of their armchairs.

Standard: Top class with athletes from across the north of England, including Percy Pud winner Andy Heyes. For most serious athletic clubs, getting teams out for the big relays is an absolute priority.

Was it worth it? It has been a long journey to Manchester from the success of Birkenhead last year when the club put out teams in the men’s 12 and ladies 6 stage relays. With a date not set until the Premier League (Association Football) fixtures were published and doubts over whether the club were even going to affiliate with Northern Athletics and therefore be entitled to compete meant than many Striders had committed to other events when it eventually came around to raising teams. With the usual catalogue of illness and injury (including a suspected broken ankle for Tom Halloway) that are part of the territory with relays, the club were down to the bare bones come race day so kudos to the lads who made it over the Snake to compete; Glossop/Tintwistle and Mottram Hill on a Sunday lunch time are not nice places. 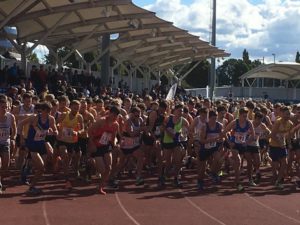 Elbows out as the race starts

Great experience for those who raced and produced some creditable performances. All of these times would place very well in a local Parkrun whilst relays, especially in such high company, are difficult beasts to handle. It was agreed that it is important to compete in these events to satisfy the needs of the stronger club members so, when the date for the 2019 twelve and six stage relays is known, get it in your diary and set yourself to be in peak condition on race day.