A chance to run Sheffield’s flattest 10k was one way the event was described. As I had not run a flat 10k before I thought it was an opportune moment to head out and try for a decent PB. That coupled with the fact it was for a charity close to my family’s hearts made it all the more appealing.

There were a few things I wasn’t quite as prepared for and no doubt some of the Striders weren’t either, from chatting to them after the race. That was the high temperatures at 9:30 am and the difficulty of the terrain in its own right. The difficulty of the terrain I hear some of you say…..Though scenic and peaceful to walk around, running without a large hill or descent to focus on at a certain point in the distance proved troublesome, in order to keep focused. There was the odd mound or mini hill, but it felt a long monotone slog in all honesty. The crowd support was great though,  lots of people clapping you round and shouting you on which was a definite lift.

From a personal point of view, I was fortunate Andy Norton was running, as we often train together and were within seconds of each other the whole race (running together for a large proportion) which propelled us both onwards. My previous PB was 37:27 (Percy Pud in December) and so with that being a little hilly, I wanted to get as near to 36 mins as possible. The race began and due to the terrain, I hoped I could keep grinding out roughly 3:36min/km. The first 5km went roughly to plan. The second 5km was a little slower, resulting in a 10km race average pace of 3:41/km and a 4th place finish.

Reflecting afterwards, I was pleased with my PB of 36:51 in the heat and it was good consistent running (36 secs off my previous). Like all of us who are competitive, I want to lower the PB further and will certainly go after it again another day.

A special mention has to go to Kristoff Boynton who brought it home for the Striders (1st Male). A hell of a run in those conditions Kristoff, well done and nice to meet you at the finish.

Also a big shout out to Mandy Taylor, the first of our Female Striders home, great running too.

The 1st Male, as mentioned above was Kristoff Boynton (Steel City Striders) in 34:24 holding off the 2nd place runner by 17 secs.

Full results can be found on the Sports Timing Solutions website. 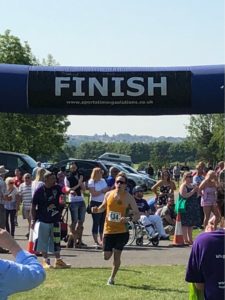