(nb. List above in no particular order….but I did really liked the oatcakes and Pork Pie).

The Three Shires event is organised by Staffordshire Long Distance Walking Association (LDWA) who organise long distance walking and running events (it’s in the name) throughout the year.

4 Striders took part in a small field of around 40 runners, with 120 walkers setting out 1 hour earlier. I call this an event as it is certainly not a race. The atmosphere is relaxed, there are no results or placings published and instead of a medal you just get an awesome hand-written certificate for your wall.

Taking on the 29 mile route, I was a little nervous, being 6 miles longer than anything I have ever run and with 1600 metres of ascent. The weather held out nicely with some amazing view from the tops, and with the title of an ‘event’ instead of a race, I took the privilege of time to stop for some views on the Roaches, and to enjoy running through Luds Church which is a spectacular piece of scenery (google it). I ran the first 17 miles with Strider buddies Amy Duck (and super dog, Betty), Jo Taylor (and Jo Brown but she is from Totley so doesn’t count). Upon reaching Shuttlingsloe, Jo T and I went up the Shuttlingsloe loop, aptly named the Cheshire Matterhorn and were treated to some spectacular views over the South Peaks. Amy and Jo B carried on tackling the 27 mile route.

On to checkpoint 2 where I could gladly have wiled away my afternoon. So much food with the aforementioned oatcakes and pork pie and awesome volunteers waiting on your every need. Alas, there was more running to be done. Feeling energised and legs still feeling strong I headed out on my tod for the 7 mile ‘Cheshire Loop’. This was the toughest part of the route, mainly due to having no-one in front or behind me for the majority of it. However a few hills, bogs and cow slop fields later, I was back at the Checkpoint.

Guess what….more oatcakes! I had time to just say hi to Nick Burns who was off on the final leg 5 minutes ahead of me. Once rested it was time for the home straight. 7 miles back to the finish. I ran the first bit faster than I wanted to as I was feeling tired and someone kept trying to engage me in conversation. I just wanted to get away. Once beyond talking range (I sound really mean but I was 24 miles in at this point) I settled into a steady rhythm walking the ups and running the downs. Some more gorgeous scenery through the valleys of Gradbach and onto Danebridge where I encountered the worst bit of the route. I was warned. I had to run past an open Micro Brewery on the banks of the River Dane. I mean, two miles from the end…that is just mean. The smell of fresh hops and sound of running water. I digress. 2 miles later I was jogging into the finish accompanied by Amy’s Car Horn as she was driving past me. Ended up at 30 miles in 6 hours 39.

All in all a fantastic day. Huge thanks to Nick for the recommendation, and in-light of that I would also recommend to anyone else especially as an intro ultra race. I hear the other LDWA events are just as good.

Well done to the Striders 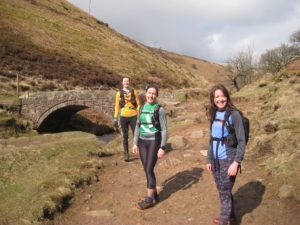 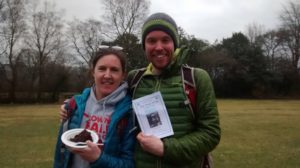 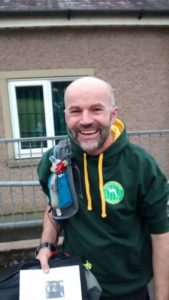