There aren’t many local 5km races these days so this one stood out as a one to do. I wasn’t quite sure what to expect as this was my first time doing it but as well as the race, entry to the Yorkshire Wildlife Park was included for the rest of the day. The course is on mixed terrain consisting of roads, paths, fields and woodland trails. The course loops around the Yorkshire Wildlife Park where you are watched by lions, polar beers and a variety of other large animals which probably viewed the runners as lunch. The giraffes were the sensible ones though, as they stayed indoors and sought shelter from the torrential rains.

The race was won by Elliot Stones (unattached) in a time of 16:53 and first lady was Judith Broadbent (Lincoln Wellington AC) in a time of 21:38. Looking at the results there were 5 striders in attendance. Notable placing in the results were Michael Richardson as first MV40 and Tracy Biney as first FV40. Full Striders results are shown below and full results can be found here. 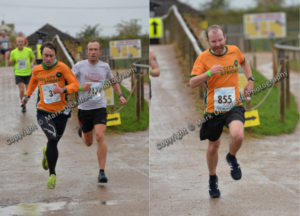