The Three Peaks fell race is billed as the ‘marathon with mountains,’ covering 23.3 miles of moorland, trail and mountain terrain over 5,279ft of the three summits of Pen-y-ghent, Whernside and Ingleborough, and, this year, 9 Striders had signed up to take it on. With Phil Howson and Dan Cook injured or otherwise out of the running, we fielded 7 on the day, in the face of some ruinous thoughts of missing cut-offs and the notorious sweeper ‘bus of shame’ circulating on social media.

Hal Roberts – who was cracked enough to appear despite running the London Marathon in a shade over 3 hours the weekend before – put the club in the limelight by transporting the Striders’ feather flag to the start field, where it stood as a banner amid the colours of the many clubs attending the race, bobbing in a gentle breeze on a typical cool spring day on the final weekend of April, ahead of the nearly 1000-strong pack of runners. 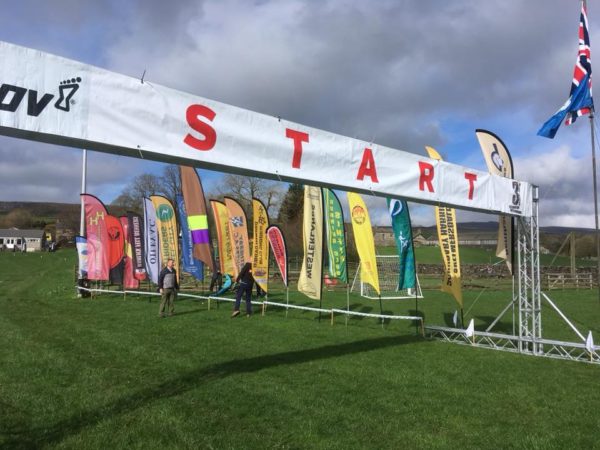 After a kit-check and briefing, we were off on time at 10.30am. It’s a fast start on country lanes, then rapidly on to a steady track up to the first summit, Pen-y-ghent. Those who have done their research know that it’s important to hold back in this early section, or else pay it back later in the race. Insiders suggest that the race ‘begins proper’ at Ribblehead viaduct, nearly halfway in; and it’s true that if you’re going to suffer, it’s going to be up the steep ascent of Whernside directly after this checkpoint, and thereafter. Pen-y-ghent comes and goes, then it’s downhill on a grassy-rocky descent to some easier running on tracks to the River Ribble; again, don’t get too carried away with the pace here, as it all seems too easy at this early stage. The Ribblehead checkpoint (another timed cut-off point; limit 2 hours 10 mins from start) is a welcome relief, and the party atmosphere helps to lift the spirits, in the light of knowing there’s a lot of effort still to give to this race. After the river crossing, it’s up the steep, grassy flank of Whernside, directly to the summit, with a section before topping-out that requires either hands-on-knees climbing, or all-fours (I got my head down and crawled).

Then, it’s a superhuman request of the body to pick up the pace again to head towards Ingleborough, which seems to be impossibly far off at this stage. The final timed cut-off point for runners comes at Hill Inn (3 hours 30 minutes after the start), and many have been swept up by the Three Peaks ‘bus of shame’ or limousine of luxury, depending on your perspective, here. Our only timed-out runner, Laura Hogg, took a bow after 3 hours 48 minutes of running.

Those who pushed the pace at the start and on the steady tracks over to Whernside begin their suffering, leaving stronger or more even-paced runners to take advantage of the final climb up Ingleborough’s rocky side. Though I’d been conservative in my running, knowing this to be the case, I was still rocking and rolling up here. My legs were sapped of strength, and cramp was setting in. After touching the summit checkpoint, it’s still a good few miles from the plateau of Ingleborough back to the finish, and the path leading to Sulber Nick and the field in Horton seems to stretch on interminably. As if in battle and shot through with arrows, runners were falling to their knees or prostrating themselves in contortions of cramp all around me. I was not immune, as I twice slipped and cramped up on the slippery limestone with a mile of Horton. But then suddenly the loud-hailers of the finish line begin to resound, and it’s a pleasant surprise to be back to a warm welcome of friendly turf and a (free) hot meal. 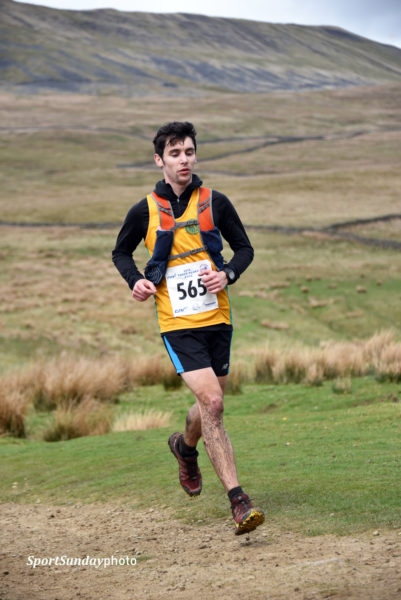 There’s no doubt that this is a tough test of aerobic and strength endurance. Stronger runners look at it as a long cross-country run with three hills; mid-pack runners look at it as three fell races adjoined by two cross-country runs; those at the back or timed-out by the stringent cut-offs see it as the marathon with mountains that is the race’s own description. And it will find out those who have not done the training.

So how does a runner prepare for this kind of race? My particular coaching line would be to prioritise long days out in the hills. Take your expected finishing time and spend at least this amount of time on your feet in training, during a long run, increasing in time each week up to this limit. So, for me, this means up to 4 hours and at least 2000 ft ascent per long run in training. Having said this, I know I had neglected some aerobic development and some strength work. So my legs felt shaky on the final two climbs, and I lost some pace in the final 6 miles. Still, I managed to move consistently through the field, having checked in to Pen-y-ghent in 336th position, and ending in 268th. This was strategic, bearing in mind the necessity of conserving the pace and effort at the start and on the early flat sections. I had also taken on much more fuel earlier on in the race than I would have normally.

It’s also wise to check your ego in these races. There are entry criteria for a reason! It’s a challenge that walkers struggle to complete in a day, so any runner on the course is undoubtedly highly capable, and many a runner has been humbled at the Three Peaks. There is great strength and depth in the field, and most runners completing in under 4 hours could lead any local fell race in the Peaks. 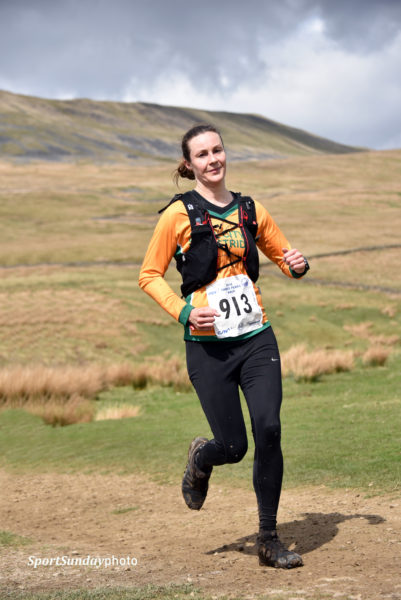 As ever, fell running royalty such as Ricky Lightfoot, Victoria Wilkinson and Nicky Spinks competed on the day. The race was won by Tom Owens (Shettlestone Harriers) in 2 hours 49 minutes, leading from Murray Strain (Hunters Bog Trotters), 2nd in 2:52 and Ricky Lightfoot (Ellenborough AC) in 2:53. Victoria Wilkinson (Bingley Harriers) won in 3:22, with Georgia Tindley (Hunters Bog Trotters) second in 3:26, and Beth Pascall (Belper Harriers) third in 3:28.

Huge thanks should go to the race organisers and marshals, who provide such a well-orchestrated and fun day for the runners and spectators.