You know you’re about to run a fell race when two of the hazards outlined by the starter are “mud” and “cattle”.  There was plenty of the former and not too much of the latter (save for a small herd of on-looking llamas on the first climb) on this, the 33rd running of the Tigger Tor, which is organised by Totley AC.  It’s a 9.7 mile category B medium fell race with around 1500ft of ascent.  The race is pre-entry only.  Full FRA rules apply and the kit check is stringent.

The race starts from Sheffield Tigers Rugby Club and among its four major climbs takes in Higger Tor (hence the name.)  By time the new start-time of 1000hrs came around, many of the ominous-looking clouds over the hilltops we were about to ascend had lifted and, although the wind continued, the temperature was rising.  The start is directly outside the rugby clubhouse and takes runners onto Hathersage Road briefly before a right turn through a kissing gate into a field (where the llamas awaited) and up to Sheephill Road.  After another 200yds or so of tarmac, a 90 degree left turn leads up a rocky, sandy path before the climb shallows a little through the heather across Burbage Moor, a notoriously wet and muddy stretch allowing the uninitiated winter fell racer (such as me) a true taste of what to expect.  Upon reaching Burbage Rocks, runners then head over the edge, where a quick descent through the bracken finishes with a crossing of Burbage Brook and to the corner of a small wood before the start of the ascent of Higger Tor.  Despite the beautiful wilderness of Burbage valley I found the going very hard here, wet and spongy and, perhaps paying for a slightly quick start, had to walk for most of the climb.

I was glad to see Goldstar offering encouragement and Lucozade half way up  Higger Tor and soon afterwards we crested the hill and began our descent, taking a hard left at Winyard’s Nick.  This is a tricky section, a narrow, deep and rocky sandstone channel cutting through the heather providing many opportunities for a fall.  Eventually however, the channel shallows and becomes one of the most enjoyable parts of the race, widening out into a soft, forgiving grassy track where it’s possible to build up some speed.  Just before the road, marshals guide us back up the hill and up Carl Wark where those ahead were on their way back down.  This gave several opportunities for greetings and well-wishes to other runners – and another swig from Goldstar’s bottle.

After a short scramble up to the summit and what feels like a ceremonial rounding of a marshaled rock atop Carl Wark the route takes us straight back down the same path and across Burbage Brook again, climbing out of the valley through checkpoint 8 (“Stone Trough”) and up onto Houndkirk Hill.  I found this stretch really hard-going.  Boggy marshland gave way to a quarter-mile of thick, cloying mud, churned up by all those ahead of me.  I was faced with the choice of going through the mud or into the heather.  I opted for the mud as I feared that heather, with its ability to claw at tired legs, might bring me down.  I was fighting cramp at this point as well (having foolishly left my drink in the car) so I was glad for the short descent to another small brook after reaching the summit.

Having reccied this a couple of times in the last year or so I knew that the climb ahead, up to the bridge which intersects Houndkirk Road and Redcar Brook, was the last but I could do nothing but walk.  A chap from Matlock, who had been with me for the last two or three miles asked “how long is left?”, obviously feeling the strain as much as I was.  It wasn’t long before after than before he had opened up a sizeable gap from me.  After leaving Houndkirk Road the route takes the same path back through the heather as on the ascent, before opening up onto the wide sandy path back to Sheephill Road.  The last mile is a straight one along the road at Long Line, allowing one last opportunity to stretch the legs out before a sharp right into the rugby club where a small, grassy ramp up to the rugby pitches adds one final bit of punishment.  Tea, coffee, beer, bacon butties and pie and peas (I would have happily consumed all of the above) await back in the clubhouse.

Full results can be found here; 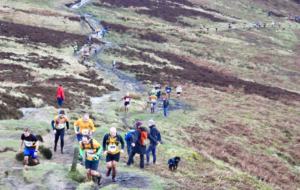