The Tissington Trail Half Marathon takes place, not surprisingly, on the Tissington Trail; the site of a former railway line, which runs along a 13 mile route, from Parsley Hay to Ashbourne. The race is held on Saturday and Sunday over one weekend, with around 400 runners taking part each day. The race is point to point. Coaches take runners from race HQ in Ashbourne to Parsley Hay, and runners then run back to the finish. The route is beautiful, traffic-free and has an overall downhill gradient. No hills! For these reasons, the race is extremely popular and sells out quickly.

The race is well organised, with all the logistics of a point to point race running smoothly. Support on the course is pretty scarce but enthusiastic. Walkers and cyclists still use the trail while the race is on, but it never seemed busy enough to be an issue. There are aid stations at miles 3, 6 and 9, and herein lies my only gripe. We were promised water and coke at the stations, and I found myself quite excited by the idea of a sugar and caffeine fix. At mile 3, I opted for water; at mile 6, I was told that coke was only at mile 9. By mile 9 I was really in need of a boost. I called out for coke, and a slightly surprised looking lady asked if I could stop while she located the bottle and poured me one. I’m sorry? I most definitely cannot stop! By the time I realised what was happening, she had put the water down and I had gone on too far to get anything at all. I gave feedback afterwards that if refreshment is offered, it really needs to be ready!

I have run this race twice before and loved it, but not so much this time. Previously, I have started at a relatively comfortable pace, then gradually increased, picking people off and working my way up the field in the latter stages. As you can imagine, with the downhill, this is a joyful experience! This time, I set off at a ridiculous pace, which turned out to be way out of keeping with my current fitness. By mile 3, I was done in, and the next 10 were utterly horrible, as I battled with empty legs, a tiring side wind and a negative head; all the while anxiously looked over my shoulder expecting 3rd lady to appear……. Which she did with 100m to go, sprinting up behind me as people shouted at me to push for the line! I managed to put in an almighty effort, which nearly finished me off, but held her off by a matter of seconds. Not quite the time I had hoped for, but all the more proud of myself for overcoming the mental struggle and holding my 2nd place. Please can someone remind me why we do this to ourselves?? Of course, I’ll be back next year!

Special mention must also go to Vic Shirley, MV75, who apparently ran the third fastest MV75 half marathon OF ALL TIME, in a quite unbelievable time of 01:34:31! Sadly, it doesn’t count for anything as it isn’t an official road half. 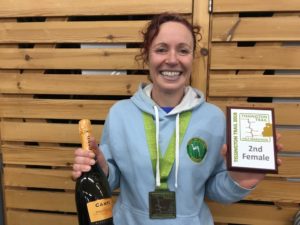