I am in bed by 9pm but sleep is to prove elusive. My mind is preoccupied with what had gone before and what might be to come. This is the fourth year in a row I am to run the Marsden to Edale Trigger fell race, and the previous three years have been exercises in varying degrees of masochism. Which, given that the race is 24 miles of bog and hills with nearly 5,000 feet of climbing, run in January, is hardly surprising and, if I’m honest, part of the appeal. Eventually, around midnight, I drift off into a fitful, apprehensive sleep of dreams about missing the start and forgetting my kit.

At 5am the alarm jolts me awake and, although I’m dog-tired, my nerves are gone. The weather forecast is relatively benign, I’ve prepared well and am happy with my kit. After coffee, breakfast and (miraculously) zero faffing about, I’m in my car heading to Bolsterstone for a rendezvous with the two other Striders racing today, Michael Squires and Mick Timm. Mick’s son has very generously offered/been cajoled by Mick, to drive us to the start of the race at Marsden Cricket Club, and we arrive there in plenty of time for the very thorough kit check, last minute trips to the loo and final decisions on what to wear.

We gather outside and, after a minute’s silence for Steve Cliff, the former secretary of the Fell Runners Association who had died the previous Thursday, we are off. The first four miles up the Wessenden valley is very runnable, but knowing how hard the terrain gets later in the race, I force myself not to go out too fast. After Wessenden Head, on the approach to Black Hill, seeing what in previous years had been raging torrents to be fearfully crossed were now gentle streams easily hopped over, it quickly becomes apparent that conditions are about as perfect as I could hope for. I was running well, walking the steep bits, remembering to eat regularly and not worrying about being passed by quite a few competitors. Black Hill, Sliddens Moss and, Crowden come and go before the route up onto Bleaklow via Lawrence Edge comes into view. This is a horrible climb which starts with a steep, pathless ascent through boulders, bracken and stunted trees, and then a muddy and even steeper track alongside the fence of the clay pigeon shooting range, with accompanying sound of gunfire and the unsettling sound of what I can only presume is hundreds of individual shot pellets landing in the trees nearby. Leaving the range behind, there’s a brief respite of flat before the tough scramble up Lawrence Edge. I‘ve always hated this bit and have never managed to get a rhythm going on it, and this year is no different. At times I am literally taking two steps up and one step back, and become aware that I’m holding up a train of runners behind as I flounder on the steep sections. More than once I try hauling myself up only for gravity to get in the way and send me back down. On one of these occasions I feel a pair of hands from below grasp my backside firmly and push me  up. I turn round to give thanks and ask if they would like to pass me, to see it’s fell running legend Nicky Spinks. She does pass and I watch in awe as she powers up the rest of the climb and rapidly disappears from view. That she has firmly grasped my buttocks with both hands is now my new claim to fame!

Once onto Bleaklow it’s a case of compass out and follow a bearing, as there are no paths and no visible features to aim for. This is the start of the hard slog of this race; walking, running and dragging yourself across tussocks, bogs and up and down energy sapping peat groughs. I’m still being overtaken by a few competitors at this point, but force myself not to push it over this difficult terrain.  The bearing I take leads me to better ground, and it’s here that I start meeting competitors in the Spine race coming the other way. Knowing they were only a few hours into a 268 mile non-stop race along the entire length of the Pennine Way puts all our efforts into perspective, The very fastest of them will take 4½ days to complete, the cutoff is 7 days!  Eventually I make my way to Bleaklow Head and then turn towards the next check point, at Higher Shelf trig point. In previous years the clag has been down and following a compass bearing was essential, so it feels odd to be able to see the marshals at the top of the slight hill from over a mile away. I’d eaten a bit during the slog across Bleaklow and am feeling the benefits of both that and the easier pace I’d taken, and realise I’m feeling relatively fresh. I am enjoying myself, and gradually start reeling in some of the people in front. One of the benefits of running over soft ground is it doesn’t hurt if you fall over, so you’re able to switch off the self-preservation part of your brain and really go for it, and the long run down from Higher Shelf towards Crooked Clough is a joy as I really open up. Shortly before the next checkpoint at Snake Pass I pass another fell running great, Jasmin Paris, who is offering both encouragement and jelly babies!

The next checkpoint is at the site of an airwreck just north of the Kinder plateau, and again the perfect visibility makes it considerably easier to navigate to than last year. I’m still feeling strong and my route choice helps me leap-frog a few more competitors who had a slightly more easterly line. After the wreck site, it’s the last significant climb of the day to get onto the Kinder plateau, and once there I look at my watch for the first time. I’ve been running for 3 hours 20 minutes which, for me, is mind-blowingly quick. I’ve only got 5 miles to go, albeit they are very tough miles around Kinder into a biting cold wind with plenty of bogs and rocks to contend with.  I press on, spurred by the thought of potentially finishing under 4½ hours and start overtaking many more runners, who seem to be running out of steam as I find extra gears. The running from Mill Hill to the final checkpoint at Kinder Low trig is possibly the best 25 minutes running I’ve ever experienced. I’m in a state of ‘flow’, that feeling where everything clicks and the running is utterly immersive and seemingly effortless. I keep high after Kinder Low and head towards Grindslow Knoll rather than taking the Pennine Way down Jacob’s Ladder, which turns out be a lonely choice as the majority of runners opt for the latter. Rounding Grindslow Knoll there’s only a steep descent and a final 400 metres through Edale left to the finish. I stop my watch on 04:23:30, just over an hour faster than last year, and 19 minutes faster than my previous best. 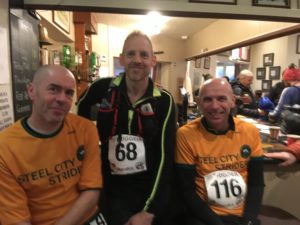 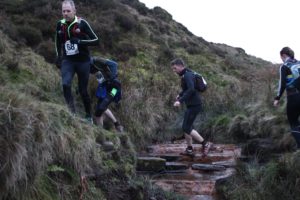 What a difference a year makes. Michael Squires (68) crosses a gentle stream 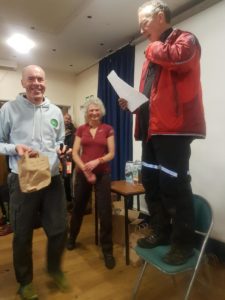 Nicky Spinks, trying not to remember where her hands have been, presents Simon with his prize for 2nd V50!