Four years ago on a cold, wet March evening I ran my first Trunce. Up and down hills, through mud, puddles and thigh deep rivers and I was hooked.

The race first started in 1968 ( coincidentally the year I was born! ) by a small group of steel workers looking for something extra to supplement their football training. As word got round it developed from a handful of runners to now, where well over 450 runners take part.

For anyone who hasn’t tried this amazing little race, here’s what you can expect:

The course is 3.8 miles with 400ft of ascent and descent with 3 river crossings to boot. Almost entirely off road with most of it on trail and farm track though there are just a couple of bits with that nasty tarmac stuff on it. This year disappointingly – due to our scorching summer weather – the rivers were low and the huge puddles that are usually found on the top farm track were dust bowls, so much fun to be had running through these and splashing the runners trying to dodge them!

There are no marshals on the course (just rely on someone else knowing the way ) but you will find a fair few locals supporting and some sneaky photographers ready to capture the thrills and spills of the river crossings.

With a slightly insane uphill start, best described as a free for all, and a equally insane fast downhill finish the course runs on an out and back route that attracts the both the die hard fell runners and the just out for a bit of fun kind of runners.
Nine races complete the series, usually three weeks apart between March and September with points being awarded for pb’s and the top 20 in each age catagory. The last race is always fancy dress where anything goes with some striders spectacularly rising to the occasion.

The race was won as usual by Tom Saville in 23:08 with Eve Crownshaw being first lady home in 29:42 (both recording PBs).

However for many, the last trunce is more of a social event than a race and the head torch crew were out in force to escort “Queen Victoria” who had wrapped up the VF50 series win long ago (she was too modest to mention this in her report above).

First strider home was Charlie Narozanska, a fitting end to a series where she was the winning Vet Female overall.

First trunce of 2019 will be on April Fools Day… 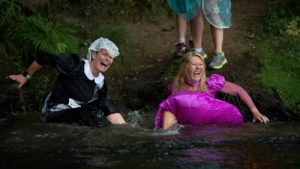