The idea for the Tyne Tail walk, from the sources of the Tyne to where the river reaches the sea, was the brainchild of Brian Burnie. In March 2012, Brian, together with three friends, carried out the original pilot walk from each of the two sources of the River Tyne to the sea at Tynemouth and South Shields.

Last year, the North Tyne Trail Ultra had its inaugural event. This year it was the turn of the South Tyne Trail. The route starts at Tyne Head, the source of the River South Tyne, in the remote Cumbrian Pennines and travels through picturesque scenery to the ‘Meeting of the Waters’, the finish for the half distance 70km.

I entered this race as my final +40 mile run before the West Highland Way Race in June. My parents live in Northumberland and they agreed to crew the race for me again. I had prepared well. I had maps, a route description from the excellent guidebook and the GPX loaded up onto my Suunto. The forecast was for rain and cold, so I was in winter kit. As always, I’d prepared a fantastic ultra-buffet.

The race start was at Garrigill. I had a breakfast of porridge and crème brulee to eat in the car. It was quite a stressful journey as there were some road closures, but I made it to registration with time to spare. I registered and was given my tracker and we assembled at the start line. There were around 60 racers. Some were doing the half (70k) and others were doing the full (140k).

The first section was an out and back to the source of the Tyne. I trotted along, chatting to those around me. I met someone called Ben who’s also doing the West Highland Way this year. We began to see some of the leaders coming back along the farm track. We got to the source, turned back and I followed the route which then took us off the farm track and across a (very good fun) technical section. I was glad of the GPX file as the path was not clear at all.

I waved at my parents back in Garrigill and headed out to Alston where the trail follows the Pennine Way for a few miles. There was a checkpoint at Alston where I picked up some extra food and filled up my drinks. My Mum was there to help. It’s always wonderful seeing a friendly face.

At Alston I realised that several other runners hadn’t taken the trail route back to Garrigill and had just ran back down the farm track. I knew I’d only been overtaken by 1 person, yet I was not where I thought I’d be on the tracker. I found this really annoying, yet know that I can easily spiral into negative thoughts which doesn’t help early on in a 44 mile race. I told myself to wish them well, that I had really enjoyed the technical bit, that it was great WHW training and that we were all back of the pack anyway. I also told myself that they maybe hadn’t realised that it wasn’t a simple out and back. It’s pointless allowing yourself to be engulfed by negativity.

I was glad that I had talked myself into a positive frame of mind as I then set out into the second stage of my route. This was my least favourite stage. It was a long an old train track. It was straight and flat. I actually had to run most of it. It made me realise how much I love a hill. When you get to a climb, it’s great to power walk for a bit. You can feel the different muscle groups kicking in and it doesn’t feel like you’re just pounding out the miles. Again, I tried to turn the negative into a positive. ‘Isn’t it great that this makes you realise how much you like hills? Remember that on the Devil’s Staircase…’

There were checkpoints at Haltwhistle and Haydon Bridge. I felt very comfortable and I was just trying to maintain a steady ticking over pace. I had ran a 30 mile ultra 3 weeks previously. My gold target was to give myself an additional 4 hours on top of my Kielder 30 mile time for this race. That meant finishing within 11:19. I knew I was comfortably within this, and that made me feel even more positive.

At the last checkpoint at Haydon Bridge I wolfed down some yoghurt and went straight back onto the trail. I was feeling great and I’d set myself the new target of finishing under 11 hours. It felt really doable. I maintained my pace and started passing other racers.

There was a big climb in the final mile or so. I dug deep and power hiked up, ignoring my legs that were begging for a stroll. I broke into a jog as soon as possible and could see that I had 5 minutes to do 4/10 of a mile – Yay! I turned a corner off the trail and there was about 150m of road to the finish line at the Boatside Inn. I finished strongly and I’ve taken a lot of encouragement from that.

At present it doesn’t look like results have been published so I’ll update when they do. 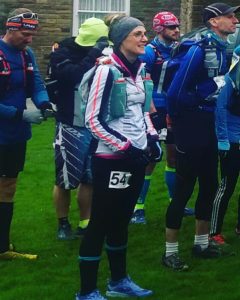