This is a low-key event based at Longshaw. It’s part of a series of races put on by Dark White Events, all of which follow a format of a long route with a shorter option, with a series of staggered start times.

Given that the initial January date which was snowed off was a sell-out, and the 10 minute start windows, I was expecting a few more people when I signed up for the rearranged date. 77 people finished the short 6 mile route (no Striders I think? Sorry the results don’t list club so I’m going from memory of sheets put up at race HQ) , and 113 the 16 mile long route (including just two Striders??!!).

The route was great; challenging (muddy, rocky, icy, hilly, boggy etc) but also very runnable. This is definitely a trail race, not a fell race. It starts at the bottom of Burbage, goes up the track to the bridge, over Higger Tor and down through Lawrencefield. At Padley Gorge, the routes diverge, the short course goes back up to Longshaw, whilst the long continues down to Grindleford and up over the edges of Froggat, Curbar and Baslow, passing Wellingtons Monument and then back over Big Moor. According to Strava it only contained 1750 ft of elevation though. Not sure where they got the name from, it’s hardly remote but I really enjoyed it; whilst I mostly knew it there were several bits I didn’t and it linked up nicely. I’d run it again. Perhaps in the summer when the puddles are slightly warmer. There was some compulsory kit, although I wasn’t checked. Conditions on the day were usual for Feburary in the Peaks; i.e. wet, cold, windy and rainy but with decent visibility, fine really.

The best thing about the event in my opinion was the signage; this was by far the best signed route (constant arrows wherever needed and often just for reassurance, not just a couple of bits of ticker tape that have long since been blown away!) I’ve done, no danger of even hesitating let along doing anything as annoying as getting a map out. All road crossings were also marshalled. There were stacks of complimentary hot drinks, cake, biscuits, crisps etc at the finish, in a warm room. Sadly my current healthy eating regime briefly failed.

The worst thing, although I knew in advance obviously and hadn’t really computed it, was the staggered start put paid to any actual racing. It’s probably for good reasons, reducing impact or getting permission or something, but it was basically a 16 mile solo time trial. But I wanted a hard long run in the peaks, I definitely got that, and I wouldn’t have otherwise.

If the staggered thing doesn’t put you off I would encourage people to have a look at these events, they do seem to be very well organised and thought out, as well as relaxed and very beginner friendly.

The race was won by a nice young Spanish lad I chatted to afterwards (24, from Majorca, Mountain Marathon and trail race specialist visiting Sheffield for 10 months and keen on local fell races, has he been spotted elsewhere?) Gerard Marce Garcia in 1:55, and Lucy Wasinski in 2:20. 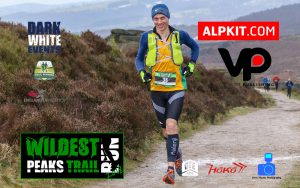