Two Striders ventured out to Wincle near Macclesfield for another of the short fell races that we are spoilt with at this time of year. Both thinking we would be lone striders it was a nice surprise to spot the gold and green across the field!

This race starts from the Wincle fete which moves location each year within the village and for this reason the race has 3 routes depending on the start point. The fete is a good distraction for family and there is a junior run as well so a good day out if you want to squeeze a race in!

The start this year was a quick blast of road before we were on to woodland trails, fields and an ever enjoyable river crossing! The route was really fun, lots of ups and downs (at least it felt like it) but nothing too challenging, along with a sneaky hill that was thrown in at the start and then again just before the finish! In total 5.9 miles of fun.

I’d really recommend this race, it was friendly, well organised and thoroughly enjoyable. I personally won’t be returning, which I only mention in case there are any other vegans out there, in which case I would think carefully before entering! Every finisher gets a trout, which may appeal to a lot of runners but amongst other things I found it hard standing in a field with everyone carrying dead trouts…. I should read the details of the race better next time. If anyone is keen on doing this it usually sells out in advance so get in quick!

First male was Jack Ross of Staffordshire Moorlands AC in 39.40 and first female was me (Caroline Brock)! 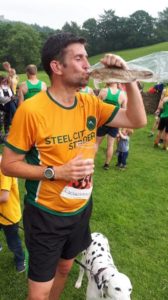