This was the race, and the result that I’d been hoping for. It all came as a result of one of those drunken evenings in December. Chatting to a mate about plans for the coming year we decided it was about time we did a marathon: a first for him, a second for me, with my only previous experience of running 26.2 miles being 6 years ago around the largest lake in England: Winderemere.

A repeat then, for me, of what is widely rated as the most scenic and beautiful marathon in England. I planned, originally, to use it as a tester. How would I cope with the distance again? Was I going to be able to push on for a sub 3:20 on another flatter, faster course later in the year and qualify for a GFA time for London in 2020. I had it all planned out. But we all know what can happen to well laid plans…

Training went well through the snowy winter, thanks to a plan sent from Mick Wall which I stuck to perhaps a touch obsessively; time and effort the focus rather than distance covered meant that I missed out on a lot of more social runs, opting instead to run solo and focus on my plan. Thresholds, tempos, intervals, long and slow, progressions, strength, speed and core work. It was a long winter!

A niggling injury, confirmed after a visit to the docs only added to the maranoia of the final month, but I ignored this and tested my pace on a park run pb 2 weeks prior to the marathon.

Race day was looking good. Cloud cover early on and a gentle breeze. An announcement about Matt Campbell, and the Brathay Trust before the start only added to the emotion of the moment.  I set off hoping to hit my target pace early, and with the adrenaline flowing I was soon chipping seconds off my targets. Having run the course in 2012, I’d looked at my mile splits and shaved time off the ones I thought I could make gains on, wrote my own pace band and used that to help on this very undulating course. A total climb of over 1,800ft means a lot of up and down which was fine for half of the route, even with the ‘Devils Gallop’ (200ft in half a mile) at mile 7.

The scenery as you run anti-clockwise on the east side of the lake is beautiful. Hawkshead adds to the atmosphere and the crowds helped too, with great support from marshals and lots of drink stations all the way round. As you swing round the bottom end of the lake at Newby Bridge you get a great boost knowing you’re now on the way back up, although it’s not quite halfway. The crowds thin on the second half of the race as there is more time spent on roads which are still at least partly open and you get less views of the lake.

By mile 20 though you hit Bowness and the end begins to feel reachable, but the hills don’t stop. Most are manageable but having hit my target pace all the way round I was fighting to keep it up now. I lost track of the mile markers somewhere around mile 22, and later realised that I’d missed the 22.5 marker in memory of Matt.

During the final few miles you can look across the lake to the grounds of Brathay Hall and that sight spurs you on. But you’re not done yet. Dropping off the road and heading towards the lake you’re mislead into thinking you’re approaching the finish. Not yet. There’s a footbridge which drops you down to a sharp left turn (tricky on weak legs) before you hit the road again and are faced with yet another climb.The end is spectacular. Running into the grounds of the Hall you’re greeted by a welcoming wall of spectators who get you through the finish in style.

Checking my time at the end I was about 20 seconds off my pace band target, 2 minutes faster than 6 years ago, and possibly on course for a sub 3:20 on a faster course.

Just the result I was hoping for. If only they hadn’t gone and shifted the goal posts for London. Ah well, time for another one of those drunken evenings again!

Steve was the only Strider to enter and came away with a great time and a top 50 finish to boot:

Results in full are here. 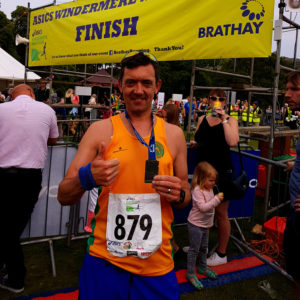