It’s fun to sit reading race reports from people like Nick Booker and Nicole Brown and a load of other Steel City Striders who do incredible feats of distance running in horrendous terrain. “That’s amazing,” you think. “I could never do that.” And then a little voice goes: “Could I maybe?” And then, if you’re me, a race like today’s comes along, grabs you by the shoulders and shouts: “NOT WITHOUT A SHEDLOAD OF TRAINING AND MORE DEDICATION THAN YOU CAN MUSTER PAL”, before nutting you between the eyes and leaving you on your backside in a puddle.

I ended up doing the Windgather race because I’d screwed up my diary the previous day and missed the Go Big Moor one. When I woke up and heard the rain I realised that had been unwise, but skipping two races in a weekend is too lazy even for me, so I squashed FRA kit into my backpack and set off.

Registration was friendly and there was a good crowd of runners sheltering from the rain, which was now really coming down.

Windgather is a 13.5-mile anticlockwise course starting on the outskirts of Buxton with (says Strava) 693m of ascent. The course is only partially marked, which gave me a very strong incentive to keep the runner ahead in sight. And according to the sign on the wall by registration: “the second half [is] considerably harder than the first”. This is a lie. In the real world, the last 13km are much harder than the first 8.5.

There’s not a huge amount to say about the first section of the race, except that at least the rain turned from a downpour to a heavy drizzle. There’s a gentle climb on tarmac, then a steep footpath up a banking, then a gradual undulating descent for about 7k, on a mix of footpath and forestry track and across a dam. Word to the wise: a lot of descending in the first section of a long race is very bad news.

It was soon after that the fun started. A steep climb on footpath and through woodland wasn’t too bad, given my legs were still fairly fresh. Then we clambered over a tree (seemingly newly felled by Storm Callum) and after sucking down a gel it was on t,o what at first sight, seemed to be a long ridge running from Windgather Rocks to Shining Tor, past Thursbitch where Alan Garner set one of his wonderful and strange novels. I wasn’t paying attention to names by that point though. I was cursing the fact that the “ridge” had maybe once been a ridge, but now several hills had climbed up it and were standing on top, admiring the view. This section took in about 5km of climbing, most of which wasn’t awful, but which overall was draining. By the time we got to the top of Shining Tor my legs were tired and I knew there was still 6k to go, but as we began a fairly gentle descent I kidded myself that this was the run-in. Amazing how you can forget that the map says “Rough Descent!” and that someone warned you about a nasty climb late on. Sure enough…

Goyt Valley is a horrible place. I never want to go there again (till next year). “Rough Descent!” would be described on Masterchef as “deconstructed drystone wall on a bed of stream, served with a peat custard”. It’s an absolute stinker and set the tone for the next 3k, which was largely run/walked in water of various depths and speeds. There was a brief respite near the bottom of the valley, but the steep path up and out had turned into a fast-running stream. I had to stop and refuel part-way up, but finally made it over, my legs pretty much gone.

The last section is mostly across grassy fields. I remember being overtaken by a few people, and then I was on my own. At some point I recall sinking up to my knee in something. The finish was a surreal experience. The runners in front had left the field, and there was no-one close behind me, so any onlooker would have seen a soaking wet man stagger towards a huddle of other men with umbrellas, pass them and come to a shuddering halt before limping away slowly.

And yes, even if I will never be as nails as the ultramarathonners and the Bob Graham Rounders (to whom I raise my soaking wet hat in salute), I had a right good time and would like to run it again next year.

2) Massive respect has to go to the marshals: it was filthy up there today, they did a great job.

The race was won by Simon Harding of Macclesfield in 1:37:38. First female was Alice Daniel of Sheffield University Orienteering Club, in 1:51:27.

Full results can be found at: http://www.macclesfield-harriers.co.uk/images/windgather2018.xls 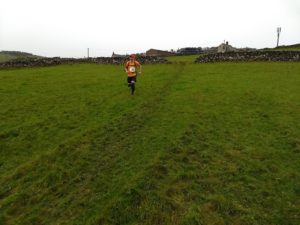