I’m trying to make it a tradition that once a year my best friend Charley and I run a 10k. Last year we ran 3 laps around the Queen Elizabeth Olympic Park which was part of a 10k series, this year we went for the Running4women Windsor 10k. The race was chosen by Charley due to the close proximity to her house and that it didn’t involve laps. I was slightly dubious about the women-only aspect, however running around Windsor sounded great to me.

The event itself was excellent and much better than I ever expected. There was free car parking, a stone’s throw from the start of the race. The course starts and finishes along the Long Walk, however not at the same point. As you start, if you look behind and over to Windsor Castle, you can see the finish in the distance. I took a look back and thought to myself how long that distance will seem when my legs are burning and I’m contemplating the ability to produce a sprint finish. Jo Pavey was a special guest wearing the number 1 bib and gave a few motivational words before starting the race. Unfortunately for the organisers, the start was delayed due to Royals being out on the course therefore we had to patiently wait at the start while they finished their morning stroll.

Eventually the course was clear and off we set! I’ve not yet plucked up the courage to start at the front so I was a few rows back. The very first section climbed up the long walk towards a statue of a man on a horse (Google tells me that this was George lll), then turning left. This initial uphill section played to my advantage, these softy southerners aren’t used to hills and I was rapidly moving up the field. A supporter on the sidelines shouted that we were in contention for the top 10. I hadn’t considered where I might place and this gave me great motivation. I’d set my watch to give me a slow alert if I dropped below 7:45-minute miles, I was feeling good and my watch was quiet. We ran through wood/park land, past the Royal lodge amongst other sights. The course was undulating but none of the hills were particularly long with no false summits. About a third of the way in there was a long downhill, this worried me as it definitely felt like more down than what we’d climbed. I chose not to push too much and instead just compose myself a touch, my watch was still quiet and I was cautious I might be over exerting myself. This turned out to be the right decision as we soon faced two moderate hill sections. Again I managed to gain ground on the ladies in front and from being outside the top 10 I began to think that I must surely be in range. By 6km I decided to up my effort, we were over half way and I had my eye on a Reading runner who I thought just might be in catching distance, 4 places in front. I soon caught the lady immediately in front of me. I initially passed her but then I decided to try and motivate her. I shouted back and told her to stick with me, she was soon back on my shoulder and I said “you catch me and we’ll catch her”. I soon began to doubt that I’d made the right decision as she started to pull back in front. We both made ground, passed the 8km marker and were on the very last hill climbing back up towards the man on the horse. This linked us back onto the Long Walk and as I saw the finish line far in the distance, my earlier thoughts became reality, although my legs weren’t burning as much as I thought they might be. I dug deep and pushed the pace although so did the ladies in front. The finish was still over a km away and I hoped that the other ladies were pushing too hard too soon.

I began to hear the noise of a guy announcing the finishers as they crossed the line and the Reading runner was in my sights and appeared to be struggling. I knew I needed a sprint finish to take them on the last stretch but was doubting my ability, however I then heard someone running behind me motivating other runners. I thought to myself “Who on earth has managed to not only catch us but waste half her breath to motivate us as she does!?”. Cue Jo Pavey! There’s she is, gliding past me within the last 500 metres, knocking me back a position as she does. Thankfully this gave me the motivation to pull out a sprint finish. I chased after Jo, passing two other runners as I did, finishing just a second behind her however never quite catching that elusive Reading runner. Overall I finished 8th, however if I’d had the courage to start on the line, I’d have been joint 5th. I’ll definitely be back next year as it was a great event and the absence of super speedy runners means that I just might be able to get myself a podium position. Oh and by the way, Jo Pavey is lovely! We had a photo and a chat after the race. She was so generous with her time and is such a great ambassador for running. 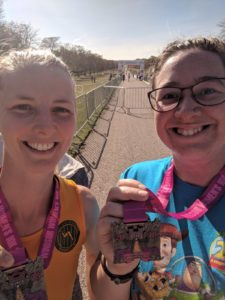 Gillian and Charley with medals 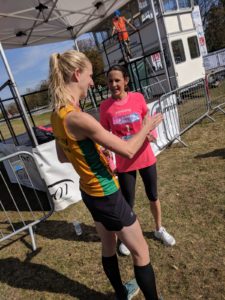