I had heard good things about the Summer Full & Half Tours of Bradwell – 33 and 16 mile routes around Bradwell Moor, parts of the Edale skyline and Ladybower Reservoir.

After running Mickleden Straddle the week before, I wasn’t expecting great things but with Edale Skyline a few weeks away, another long hilly run seemed like a good idea. This was the first time the winter version of the Half route had been run and omens were not great when heavy snow was falling on the drive over through Hathersage.

By the start, the snow had turned to sleet/rain and the initial climb Dirtlow Rake behind the cement works was fairly brutal with driving icy rain direct in the face. After a flat (but icy underfoot) section between CP1 and CP2 , we were treated to a dicey descent down Cave Dale into Castleton. It was tricky staying upright on this steep downhill section with the terrain alternating between frozen turf and wet limestone.

After heading through Castleton, the route headed up to Hollins Cross via a muddy steep ascent, and then up to Lose Hill and CP3. By this point the rain had eased slightly but it was still tough going into the wind and with poor visibility.

A fast descent off Lose Hill (steep frozen turf again) led down to a short section on the Hope-Edale road (CP4)  The route then headed up Win Hill and onto the most navigationally tricky section to CP5 tucked away in the woods. A lot of people (me included) took the wrong path on this section and managed to miss the CP first time round costing a few minutes.

After a descent to the Thornhill Trail, I found myself in a decent sized group which mostly stayed together to the finish where a typical post-fell race spread of soup, sandwiches and tea was waiting.

The full results are here. 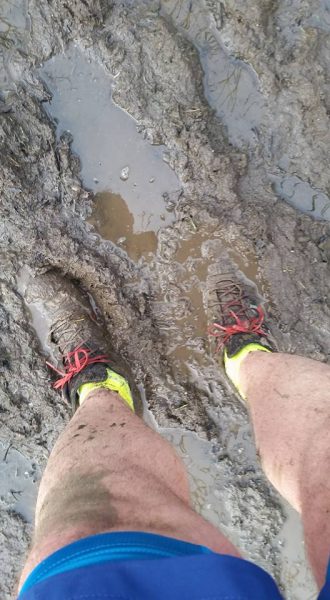