I don’t like running on roads, but wanted to increase my distance so chose this as my first marathon(!!!) back in the Spring, so this was my target “A” race for 2018. Life got in the way of training a bit (doesn’t it always?) but I kept increasing my distance, and running in the hills to be terrain specific – lots of power hiking!

I’d checked out the route in the summer, staying overnight in Kirk Yetholm to run across two days, so I knew where the soul-destroying hills would be, and the lovely downhill for much of the final third.

The race was organised by Trail Outlaws (www.trailoutlaws.com) who put on various trail events in the North of England and Southern Scotland. Registration etc was at the Youth Hostel in Wooler – it was well-organised with our kit being checked before being allowed anywhere near registration. Squashing everything back into my backpack was entertaining in the pre-dawn gloom. There were lots of scary looking people with t-shirts showing which ultras they’d finished, but people were friendly. The race briefing (and minute silence – it was Remembrance Day) was held at the Youth Hostel before we moved up a path to the start on the Common Road to the North.

The route covered 6 miles across fairly undulating terrain through forests, by streams, and across heather moorland to CP1. I was pretty much towards the back and our main concern was beating the cut off times! I took 15 minutes off my recce time which I was pleased with, before heading up, up, up, up, up to The Cheviot at 815m. The climb was brutal, particularly with the peat bogs that had to be negotiated, but we eventually reached the flagstones of the Pennine Way, which were a very welcome sight. The clouds that were down at this point really made it feel like those creepy marshes from Lord of the Rings though.

CP2 was an emergency one at a mountain rescue hut, before we headed along the ridge that marks the Scotland-England border. The descents were pretty technical, and we had to avoid falling into the nearby valley, but it was good to come out from the cloud layer and see more than 20m ahead again! There were more uphills though, and more mud, and I went in up to my left knee at one point. I was happy to keep both shoes on despite the best efforts of the mud to suck them off.

CP3 (17 miles) was a self-clip above Kirk Yetholm where the St Cuthbert’s Way path intersects the Pennine Way, and we could turn back towards Wooler (yay!) Only problem was that I couldn’t find the clip, and decided to take a photo, and hoped that that, and my Strava trace, would let me finish. I almost hugged the next runner I met who said that she hadn’t found it either. We discovered later that the clip hadn’t been placed.  It was a lovely easy downhill to the next checkpoint (18.5 miles), that actually had water, cola and yummy Malteaser cake (3 pieces! ). This was the first place we’d seen a road since the first checkpoint.

We followed the road down to Hethpool before returning to the trails (and bogs!)  which led through to the road-end at Yeavering Bell and CP5 (22 miles).  The last hill beckoned, on top of which were yet more bogs, but they managed to wash off the thick layer of mud on my shoes, and then I spotted the Northumberland Mountain Rescue landrover at the final summit.  Downhill again to the road – I had got slightly lost here on my recce, so was happy to follow the signed route this time and a last, unexpected checkpoint for a final jelly-baby and the last 1.5 miles back in to Wooler. By now it was getting dark, and we were approaching forest, so on went the head torch, and the final paths were covered.

It was great to see people cheering on the final bend back into the Youth Hostel, and I struggled out of my timing wristband for a final time of 8 hours 45 mins, nicely 45 mins inside the cut off.  It was great to get a cup of soup, admire my medal and t-shirt, and then phone my brother, who had no idea I was planning anything of this distance! Before heading for the car I cheered in the final finisher.

I really loved my first experience of what was technically an ultra despite the name, lots of people at the back of the pack enjoying the day in the hills, discussing how hard this was in comparison with other ultras (I was assured the 53-mile Highland Fling was easier!)  and I enjoyed the looks of disbelief when I told people it was my first marathon. I was pleased that I seem to find a (slow) pace and just keep going, people at the end told me that I’d just run away from them in later stages, which was a lovely surprise.

In summary – well organised race, fabulous scenery, really well marked, lots of elevation and descents for a “short” race. The weather was pretty good; I’d hate to do it in bad conditions though.

The first male to finish was Ian Twaddle in a time of 4:09:47, first female was Fiona Brannan in 5:14:49. Full results can be found at: https://www.trailoutlaws.com/wooler-results-2018.php 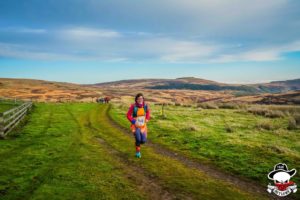