This race was my third as a strider but the first time I had experienced the marvel of striders en masse! To quote the race commentator at the finish line “another Steel City Strider – I think they’ve brought two buses!” We could certainly have fitted on two buses with 81 Striders taking part on this lovely, crisp, typically autumnal morning!

The Worksop Half Marathon and 3km fun continues to be popular with 2,369 runners taking part. The beauty of this half is that it mostly takes place in Clumber Park. So you are surrounded by ancient woodland but with the advantage of wide roads that easily fit everyone on without it being too crowded. The route itself is definitely undulating! As soon as the race starts there is a pretty decent hill to run up which runners do have the benefit of running back down again with half a mile to go.

Having completed Chester Marathon three weeks earlier and prior to that, had  also trained for and completed London Marathon I wasn’t sure how I would fair, but as the last half I had run was Retford in March and having followed coach Mick Walls training advice since then  I was hoping to get around 1:45.

After recovering from the hill at the start, I caught up with fellow Wednesday night Graves runner, Phil Swirles who was looking to improve on his Bridlington half PB that he had set three weeks before. I then spent most of the race overtaking, then being overtaken by him and fellow strider, John Maples. Having spoken to quite a few striders after the race, the views were positive, even though the course isn’t the easiest. I personally found it hard, having to push myself to keep the pace up the whole way to be in with a chance of a improving my previous half marathon time.

Well done to all striders that took part including Ellie Cooper and Sarah Soden who ran their first half marathon and to the many who managed a PB! Those I know of who did were  Al Dalton, Laura Fletcher, Zoe Dickinson, Adrian Fisher, Alasdair Menmuir, Jude Bissell, Andy Pembroke, Phil Swirles, Luke Smith, Malcolm Baggaley, Claire Grisdale, Rachel Rea, Joe Lee, Gillian Burgon, Calla Lily Kate (Course PB),  Sam Keen, Michael Spencer and Nicky Rafferty. I also managed to knock 4:20 off my previous PB, coming in at 1:45:10.

First Male over the finish line was Kristian Watson from Sutton in Ashfield Harriers and AC in 1:11;26. First Female over the line was Alice Thackray from Charnwood AC in 1:26:52. First Strider was Phil Skelton in 1:15:46 and first lady Strider was Lucy Broom in 1:34:32 who was also second in her age category.

Please note there have been issues with some runners not receiving a chip time that the organisers are trying to rectify.
Full results are here. 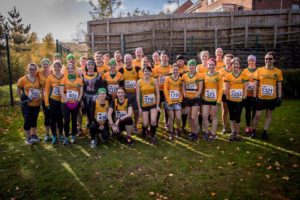