The Wortley Wobble is one of a series of three evening races in South Yorkshire organised by “It’s Grim Up North Running”, who have a growing reputation for putting on friendly, multi-distance events across Yorkshire. Previous events have included the Sir Titus Trot in Saltaire, and the Elsecar Running Festival and Santa Dash.

The Wortley Wobble was the second of the series, sitting between the Cannon Hall Dash on 9th May and the Colliery Canter at Rabbit Ings Country Park on 4th July. All three races offer a 5 mile and a 10 mile option.

Wednesday 20th June saw a relatively small number of runners join the start line at Wortley RUFC, most likely due to the early start time of 6pm (the organisers have subsequently listened to feedback and next year’s evening series will start at 7pm to allow more people to get there after work). The route itself took runners along the Trans Pennine Trail, with the 5 milers turning back at a water station shortly after a tunnel, and the 10 milers continuing to Penistone and back. Both routes were well signposted and marshalled, with a sting in the tail in the form of a good hill back up towards the church in Wortley village in the final mile. All “Grim” races are governed by the Trail Running Association, and whilst some are chip-timed this one was timed in the old fashioned way (stopwatch at the finish line).

Three Striders took part, all selecting the five mile option bearing in mind the forthcoming Round Sheffield Run, and all benefitting from the homemade cakes, snazzy medal and goody bag at the end  of the race (this included the finisher’s choice of real ale, lager or soft drink!). Whilst it was a pity so few people participated, it did mean that some less prominent Striders were able to revel in a bit of glory, with Cara Morris being presented the silver trophy as second female finisher in the 5 mile race, and Caroline Brash getting bronze. 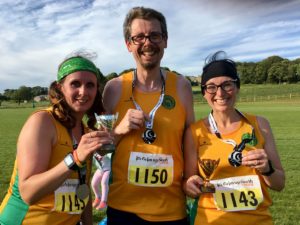