Off the back of my unexpected silver medal at the British Championships, all focus turned to the Yorkshire Vets Track and Field Championships at Cleckheaton. This was going to be my final competition of the summer season before some well earned downtime.

Pre-entry was required 2 weeks before the event and with no online entry I wasn’t expecting a stellar turnout and I was proved right.  I really think the organisers of these meetings need to embrace simple things like online entry.  I appreciate many of the organisers at vets meetings are vets themselves, but it doesn’t mean we still have rely on emailing word documents and posting cheques and postal orders!

I arrived at the track in good time to find that only two other V45 had pre-entered in both the 100m and 200m. I didn’t recognise the names, so I just anticipated that everyone was a flying machine and prepped for the first race, the 100m.

Upon arrival I was greeted with great weather; Light winds and sunshine. Nothing like the storms and high winds forecast earlier in the week. This was a welcome bonus.

As there were quite a few different age groups taking part in the 100m (right up to V80!!!) they mixed up the races with various age groups. So my race was up first and from the people that I did know, I knew that some of them were V35, some V40 alongside who I assumed two other V45 and myself.

So a race of 7, including Tom Grantham from City of Sheffield. So a familiar face.

No blocks, there never is at Cleckheaton unless you take your own. Down we go, BANG, as per usual didn’t get off the best start and people pulled away. But confident as always that I will get up to speed I kept on at it. I was in lane 6 of 7 with all the whippersnappers on my left in the lower numbered lanes. Slowly slowly catchy monkey and I reeled them in before the line and I was convinced i’d pipped Tom on the line.

Talk after was from everyone that they’d not even seeing me come later on the outside….. some folk on the inside saying they thought they’d won. Silent assassin obviously. LOL.

So only after the race do I find out when seeing the result that there was only one other V45 in the race, the other guy must have pre-entered but not turned up.  So whilst it was a great race against the other fellas, it wasn’t really much of a race for the V45 medal.  But at the time, I didn’t know that.  Which probably helped me give it my all and come away with a new PB going down to 12.02 from 12.48.  As such, that also becomes the new Striders Vets track record for 100m.

On to the 200m.  For some crazy reason the timetable of track events only had 40 mins between the 100m and 200m.  Usually you get much longer as its a tough ask to give it your all in both races with such a short recovery.  But it was the same for all of us, so I thought lets just get on with it.

But here is when things turn sour.  Because there weren’t as many older guys doing to the 200m they split the races into smaller fields

I watched on frustrated as the V35/V40 race looked super competitive as you can see from the result.

So the four of us in the V45/V50 race went to the blocks and off we went.  I think I got out ok, but maybe my opinion was clouded as I was soon well clear of anyone.  The race turned into a time trial, but with no one to chase and no one to chase me I don’t think my heart was fully in it.

PB stays at 25.06.  I’m convinced i’d have pushed more and worked harder if I had been in that other race.  I’m not saying i’d have beaten Tom Grantham or ran 24.55, but with an incentive i’m sure i’d have given it a good go. Ah well.

So I came away from the afternoon with 2 race wins, 2 gold medals, 1 PB, 1 club record and 1 dose of frustration.

Not a bad way to round off the summer I suppose?  Despite the golds feeling somewhat hollow victories due to the lack of opposition.

Rest time now, i’ve got an achilles injury that needs resolving and i’m going to practice what I preach by taking a month or so break from running fast/hard and lifting weights.  Refresh the body and mind and get hungry for it again.  Everyone needs a break or two through the season, you just can’t keep training and heaping stress on 52 weeks a year!

Then once refreshed i’m going to come back through the winter looking for sub 12 in the 100m and sub 25 in 200m and see where that takes me in 2019.  Got to have targets. #dreambig

I already know there’s going to be the Run, Jump, Throw indoor series at EIS in December/January, so those are my early targets.

Full result from the championships available from Power of 10. 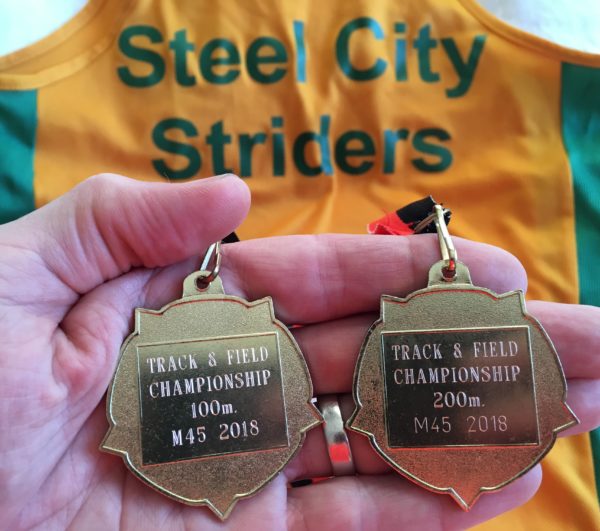